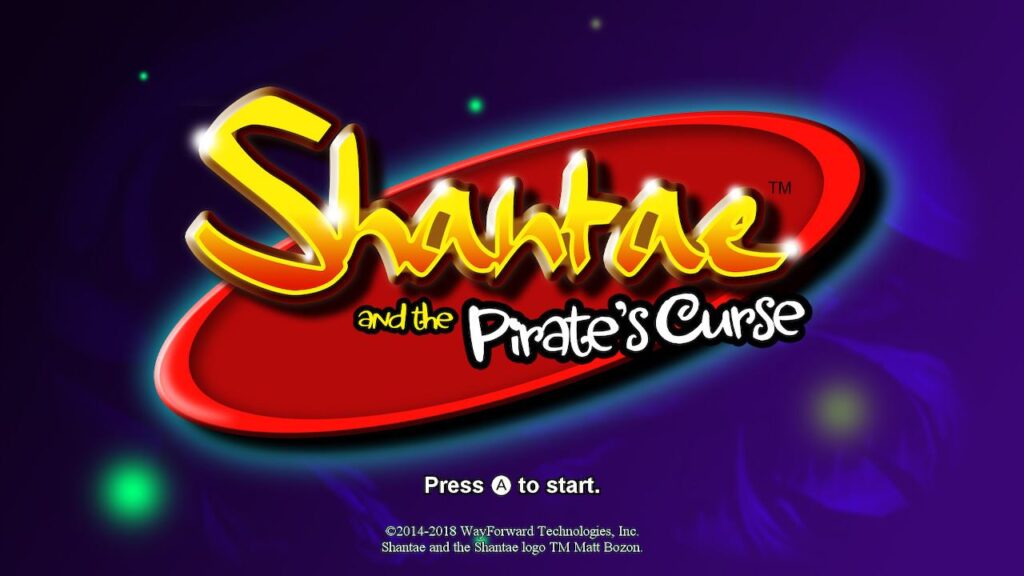 I just dropped over 300 dollars this last weekend. Limited Run Games decided to rerelease the original Shantae on both the Switch and GameBoy Color. I bought multiple copies, I am not ashamed. Since I dropped so much on this game, I figured I should review a few of the other games. Released in 2014 and developed by WayForward, Shantae and the Pirate’s Curse launched on the 3DS initially and then everything else over years. Pirate’s Curse quickly became one of the best platformers on the 3DS and a fan favorite among 3DS owners. 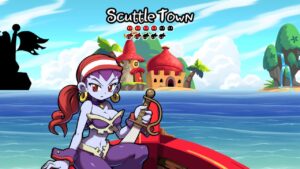 Following the last game, Pirate’s Curse picks up with Shantae having to defend Scuttle Town without her powers. Most of the intro revolves around Shantae having to hide her loss of powers from the mayor to keep her job. After a run in with the pirate Risky Boots; the two team up to stop the Pirate King. Pirate’s Curse creates a fun and somewhat humorous story that has somewhat dark undertones at times. With a cast of fun characters and many different stages each with their own set gimmicks; Pirate’s Curse is probably one of the better games to get started on the series. 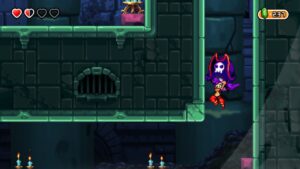 Unlike previous games, without the use of her powers Shantae must rely on other means to aid in her adventure. Shantae still can whip her hair at the enemy to do damage along with using items she finds in the field. To make up for the lack of magic, Shantae has access to various pirate gear that she finds. From a pistol that can be used to reach far off switches and an oversized pirate hat to slow her fall. While it is sad that Shantae is unable to transform into different animals, the new gear she picks up does make up for it. This also makes a nice change of pace as no other Shantae game uses pirate gear. 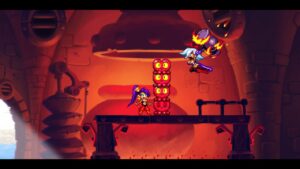 Aside from Pirate gear, Shantae also has access to more items to help more in combat than exploring. Items inside the inventory are just consumables that have multiple of kinds of effects. Some increase stats like strength, some items heal, and other items can deflect projectiles. These items can help in a pinch. To help out in the health department, collecting heart squids can be used to forge more health. Shantae also has access to a magic lamp that can be used to absorb magic found from certain enemies. Gather up all the magic in order to help out Shantae’s adventure. 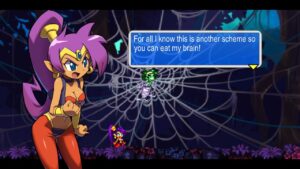 The pixel art style creates a nice feel that more resembles the style of games that appeared during the SNES. I feel as though this works well with the game fun and vibrant environment. Kind of a nice contrast to many of the darker metroidvania type games out there. Even the darker parts of the game still feel have a colorful feel to them. Combined with the more techno styles of music, this creates the sense of urgency of the players. Shantae and the Pirate’s Curse creates a nice atmosphere that draws the player into its short but interesting world.

Shantae and the Pirate’s Curse is easily one of the more memorable games in the series. Simplifying the gameplay and exploration in comparison from the last games; Pirate’s Curse became one of the top games and one of the best points to jump into the series. Really the only things the player needs to watch out for are missing story pieces. Playing the game, however, will fill in story fairly easily.

One Reply to “Video Game Review: Shantae and the Pirate’s Curse”