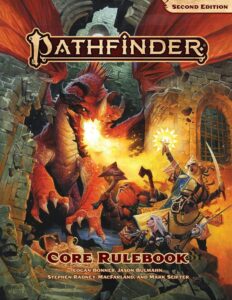 Pathfinder was my rebound TTRPG after the very disappointing 4th edition of D&D. Paizo took the open gaming license of D&D 3.5e and improved it in so many ways. Pathfinder became my default high fantasy system for the last decade. However, like its predecessor, the game reached a peak and needed a fresh start if it was going to compete with the wildly successful D&D 5e.

The main mechanic overhauls that stand out in 2e are the 3-Action turns and the Modes of Play.

3-Action Turns. In combat, there is no more Standard, Move, or Free action. Instead, each combatant get 3 actions each turn. Most actions (e.g. moving or attacking) take only 1 action. Others take multiple actions (like spellcasting) or can be free (like shouting!). My favorite change in this edition is that a warrior can attack multiple times at 1st level.

Modes of Play. There are 3 modes in this edition: Exploration, Encounter, and Downtime. During exploration, players can perform different activities to give their party an advantage without performing a bunch of rolls. Encounter Mode is for social or physical conflicts where the players need to track turns. Downtime allows players to do things that take a large amount of time like crafting or making money doing side jobs.

The game still need some improvements. Challenges are hard to balance and the character creation process had me scratching my head a few times. Overall though, most of the changes really set 2e apart and make it a decent competitor to D&D.

I will give Paizo this; Golarian is a unique and multifaceted world. Every nation has its special characteristics. Cheliax bases its rule of law on devil worship, undead populate the nation of Geb, and Numeria is home to strange tech fallen from the stars. My biggest issue even from 1e is the prevalence of humans. The other races (ancestries in 2e) are rare sights especially in the Inner Sea region of Golarian.

As with most high fantasy games, ancestries run the gamut between elves and humans. All the standard classes are represented with two notable changes: the popular Alchemist is now a core class and the Paladin is rebranded as a Champion, supposedly for less alignment conflicts. There is a lot of character customization available through class and skill feats, but this might overwhelm new players with too many choices.

While Paizo has made sure to include the occasional LGB character into their stories, trans and gender fluid characters were underrepresented. This was highlighted during a panel on queer gaming at 2012’s GenCon where Paizo leads could not readily think of a trans character in their stories. Wes Schneider, co-creator of Pathfinder, reaffirmed the company’s commitment to inclusion in 2014 and in 2015 unveiled Shardra, an iconic trans dwarf shaman. Further, they have made an effort in the 2nd edition to encourage players to “challenge gender notions”.