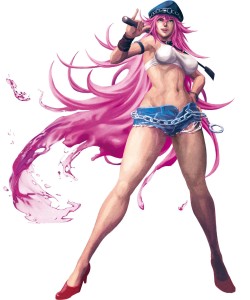 There were several times where he was arguing that Poison is transgender woman that he used masculine pronouns. You should always use feminine pronouns when you are talking about a male-to-female transgender.

The opposition to Poison as being transgender he labeled as “100% female”. Using this word to describe a female who is not transgender makes it appear that transgender women are less of a woman. I have never heard this term used by the transgender community. My generation use to call them genetic girls. The popular term currently is cisgender female.

Near the beginning of the video he used the word “tranny”. In my opinion, perhaps the worse word someone could use to describe us. I didn’t have much hope that it was going to be a positive video after he said that, but he only used it once and overall I think he was respectful.

I’ve never actually played Final Fight but I did play Street Fighter. I got into the second game in the series. I use to have fun playing as Chun-Li at the local arcades in the early 90s. Poison wasn’t introduced in the Street Fighter franchise until Street Fighter VI was released in 2008. By that time I lost my interest in fighting games. Street Fighter V is scheduled to be released in 2016. I didn’t see any official announcement that Poison would be in the game. I might pick it up if she was.