On January she tweeted that her last tournament will be the 2015 StarCraft II World Championship Series. She had a long a storied career. In total she has won over $110,000 in Starcraft II video game tournaments. This places her as the second most in tournament winnings among female gamers.

I think wcs may be my last tournament

After her performance in the IGN ProLeague Season 4 tournament she joined Eclypsia, a professional gaming team out of France. She only stayed with the team for a month until joining Team Acer out of Germany where she is currently a member.

There was a lot of talk about her gender after her showing in the IGN ProLeague Season 4 tournament. The question was brought up during an online interview with a fan blog in April 2012.

Okay, to stop all this speculation — it is true I am MtF [male-to-female] transgender, and I kind of expected this reaction. I have never tried to bring attention to myself for anything other than my play, so I don’t feel like this should be a big deal.

Her next tournament entry was an invitation to the 2012 StarCraft II World Championship Series: Canada Nationals on July 14, 2012. The top ten players would qualify for the 2012 StarCraft II World Championship Series: North America Finals. She came in at first place at the Canada Nationals with an overall 12-1 record in the tournament. She went on to also take first place at the North America Finals on August 26, 2012 also with an overall 12-1 record.

The streak of first place finishes came to a halt during the Ritmix Russian StarCraft II League Season 2 tournament on November 12, 2012. She advanced to the grand finale out of the winner’s bracket earning her a one game favor over the loser bracket’s winner Lee “Leenock” Dong Nyoung from South Korea. She lost the match against him 3 games to 4. Up to that point she was 9-3 throughout the playoffs. 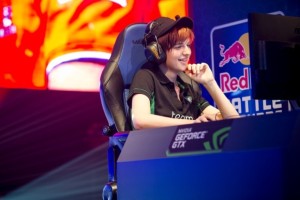 A month later she entered the MSI Pro Cup Worldwide going 4-1 in the group stage and again advancing to the finals. Yet, she lost and came in second in the tournament losing to Ko “HyuN” Seok Hyun from South Korea zero games to three.

On January 15, 2013 Team Acer formed a partnership with the South Korean team Axiom. Under this partnership, Scarlett was able to travel to Seoul, South Korea to train for the 2013 Global StarCraft II Team League. She made her appearance in April 5, 2013 when she faced and defeated Jung “Mvp” Jong Hyun out of South Korea. The game was streamed on GOMeXP, a South Korean streaming service. She became the second female player to win a game on GOMeXP and the first female to beat a male player. She finished the tournament with a 3-4 record helping the team win second place.

She left South Korea on August 4, 2013 to participate in the 2013 World Championship Series Season 2 America in Santa Monica, California. It was her first premier tournament with her competing for a part of the $100,000 prize pool. She got first place in her group with a 4-1 record but lost in the semi finals to Lee “Jaedong” Jae Dong from South Korea two games to three.

Her next premier tournament was the Red Bull Battle Grounds in New York City on November 23, 2013 competing for a $50,000 prize pool. She went 4-3 in the group stage qualifying her for the semifinals. Yet, she lost the match two games to three to Kim “sOs” Yoo Jin out of South Korea. She won the third place match up two games to zero against Jang “MC” Min Chul out of South Korea.

December 6, 2013 was Scarlett’s next premier tournament at the ASUS ROG NorthCon in Neumünster, Germany. She came out of the tournament taking second place winning $5000 of the $25,000 prize pot. She went 6-3 in the group stage and lost to Jaedong two games to four in the final. This was the second time Jaedong eliminated her from competition in a premier league tournament.

She was invited to the MLG GameOn Invitational, an all North and South American online tournament. She came out of the group stage going 4-3 in the group stage earning her second in the group behind fellow Canadian Sam “Kane” Morrissette who beat her two games to zero. She won the finals going 7-1 in the playoffs and beating uan Carlos “MajOr” Tena Lopez out of Mexico.

After coming off two major tournaments, she entered into the premier tournament HomeStory Cup IX on June 5, 2014 in Krefeld, Germany. She went 4-1 in the group stage qualifying her for the quarterfinals. She was paired off against Mun “MMA” Seong Won out of South Korea. The winner would go on to face the winner of the match up between Yun “TaeJa” Young Seo out of South Korea and Jaedong, who has eliminated her from two other premier tournaments. Although she won the match up 3-1 against MMA, but Jaedong lost against TaeJa 2-3. She played TaeJa during the group stage and beat him 2-1. It looked like she might be able to win the tournament with Jaedong eliminated. Yet, she lost to TaeJa in the semi-finals 1-3.

The Guardian reported that she is practicing Dota 2 to compete against other professionals in the game. Since Team Acer doesn’t have a team for Dota 2 they will either have to create one or she will have to join a different team. We look for her continued success in Dota 2.