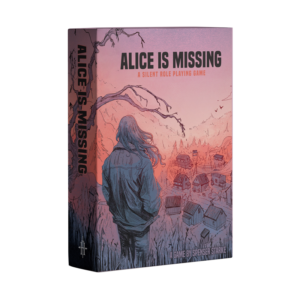 In my 20+ years of gaming experience, I have never played an RPG like Alice is Missing (AIM). Until now, systems like D&D and Pathfinder have been centric to my awareness, which I now regret. A session of AIM is an intense experience that will stay with you long after you leave the table. Five players embody the friends and family of Alice and over 90 mins, weave together a collaborative story that is completely unique as they try to discover what happened to Alice.

Lets start with the obvious question: What is a silent RPG? That was the question that piqued my curiosity. How do you sit around a table and play an RPG without talking? Its simplicity is beautiful. While the setup and debrief of the game does require talking, the gameplay itself takes place completely over live text messaging. There is no math, no dice rolling. Clue, Suspect, and Location cards randomly drawn at specific time intervals guide the players to a complete story. The only reason I docked a dice in this category is because the game relies on some level of technology and technology can be fickle.

The atmosphere created by the setting and the music from the game timer is reminiscent of story games like “Life is Strange”. Like it’s inspiration, AIM takes place in the town of Silent Falls, a failing coastal town. Very little else is given about the setting for the singular reason that it is up to the players to fill in the details. Even the 5 highlighted locations will have completely new meaning as the players assign initial suspicions in Alice’s disappearance. This customization allows players to personalize the world they’ll inhabit for 90 mins.

Much like its setting, AIM’s characters are merely shells waiting to be brought to life by the player’s imaginations. By answering a few question prompts, a player can make the character their own. The only sticking point here is there are only five characters and they have specific roles in the story (e.g. the Secret Girlfriend or the Older Brother). Regardless, relationship development between these characters is the driving force of this game and by the end, everyone will be deeply invested in their characters and their story. Those who truly enjoy improvisation and serious character role play will love this aspect.

The game guide specifically addresses gender and sexuality inclusion in the game. First and foremost, facilitators are encouraged to make their game a safe space for personal expression. The players are free to define their character’s pronouns and identity, which simply informs the story they’re about to tell. A “Lines and Veils” system helps to define the content boundaries that players may feel comfortable within. Further, players can “X” any content they deem offensive, removing it from the story. The sensitivity and inclusion into the game’s foundation is a beautiful thing.

4 Replies to “Review: Alice is Missing – A Silent RPG”