Seeing all the hype about Crusader Kings III and wondering if you should buy it? Looking into it and feeling overwhelmed by the GUI or the premise? In this article, I’ll be going over the franchise from beginning to end and talking about the general things. Next week I’ll have had enough time to write a thorough review of the third installment, so expect that, but without further ado, let’s get started.

The first game was released way, way back in 2004. Paradox Interactive was just as behind it then as they are behind the new releases now, and when you look at the three games briefly, it’s charming to see how far the studio has come with its games in that span of time. 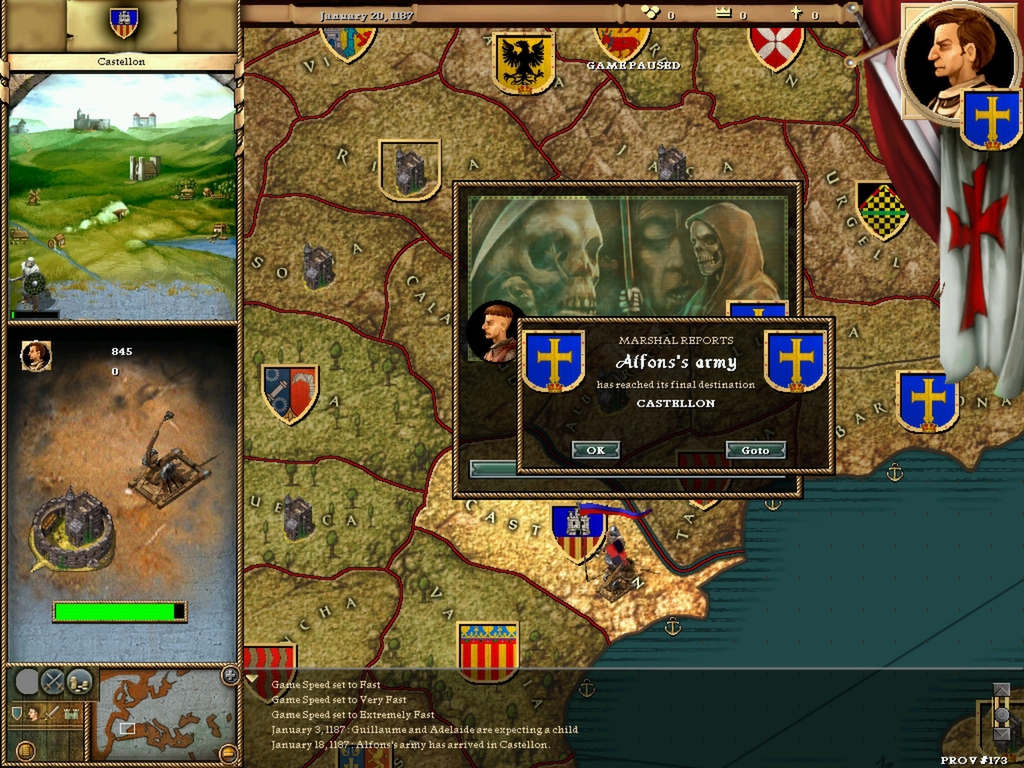 To be clear, I didn’t get a chance to play this installment, so I can’t speak on the mechanics from firsthand experience, or how things differed between it and its progeny. I can, however, read up on the differences, and break them down in a simple statement:

Being from so long ago, this installment lacks a lot of quality of life features that gamers are used to today. From what I can see, even when the second one came out there was much to be desired. It’s really something to understand how far games have come, and that can be easily achieved by going back to classics like the early 90’s and 00’s era of games.

I see people calling for pen and paper to keep track of things that are now handled by UI in the second game, explaining bugs and changes as if reciting lore handed down verbally, and talking about the now antiquated mechanics as if retelling stories of the “Good ol’ days” of gaming where not everything made sense or was easy.

I don’t think I need to go into the vast differences in the graphics, but I have to stay I appreciate the style of the designs used in this first game. 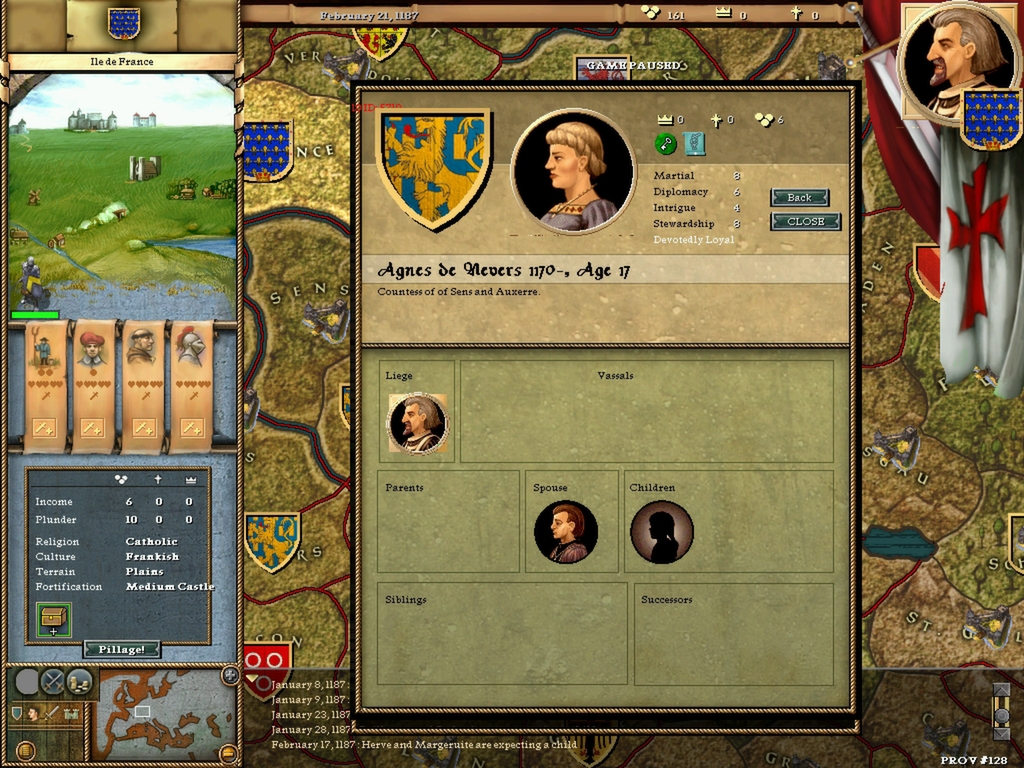 If you want to play this game yourself, you can get it on Steam right now for free! I recommend it if you can’t get the third one for any reason, as it really has kept my interest while I’ve been waiting to get the third one. As I write this, I’m just now getting the third installment to play so I can write my review of it next week.

It was released in 2012, and since then has held up to standards thanks to massive updates, many changes including mechanics and features. Just last year I had a friend raving about it to me about how he would play it with his friends and they would play for days and days at a time just for one game. This is due in part to the financial aspect of owning the game. Even now, with the base game being free, all the DLC is a flat $300! I really can’t shame anyone here considering my investment into my wife’s and my collection of Sims 4 Expansions totaling over $600, but still.

The game runs smoothly, as you would expect, it looks good even with a 2020 lens, and overall I have to say Paradox really impressed me with this game. The franchise has a lot of followers for a reason, and it’s no wonder that so many people are stoked for the newest release. When you start to get invested in your dynasty every event starts to weigh on you. The consideration of one choice over another becomes important. 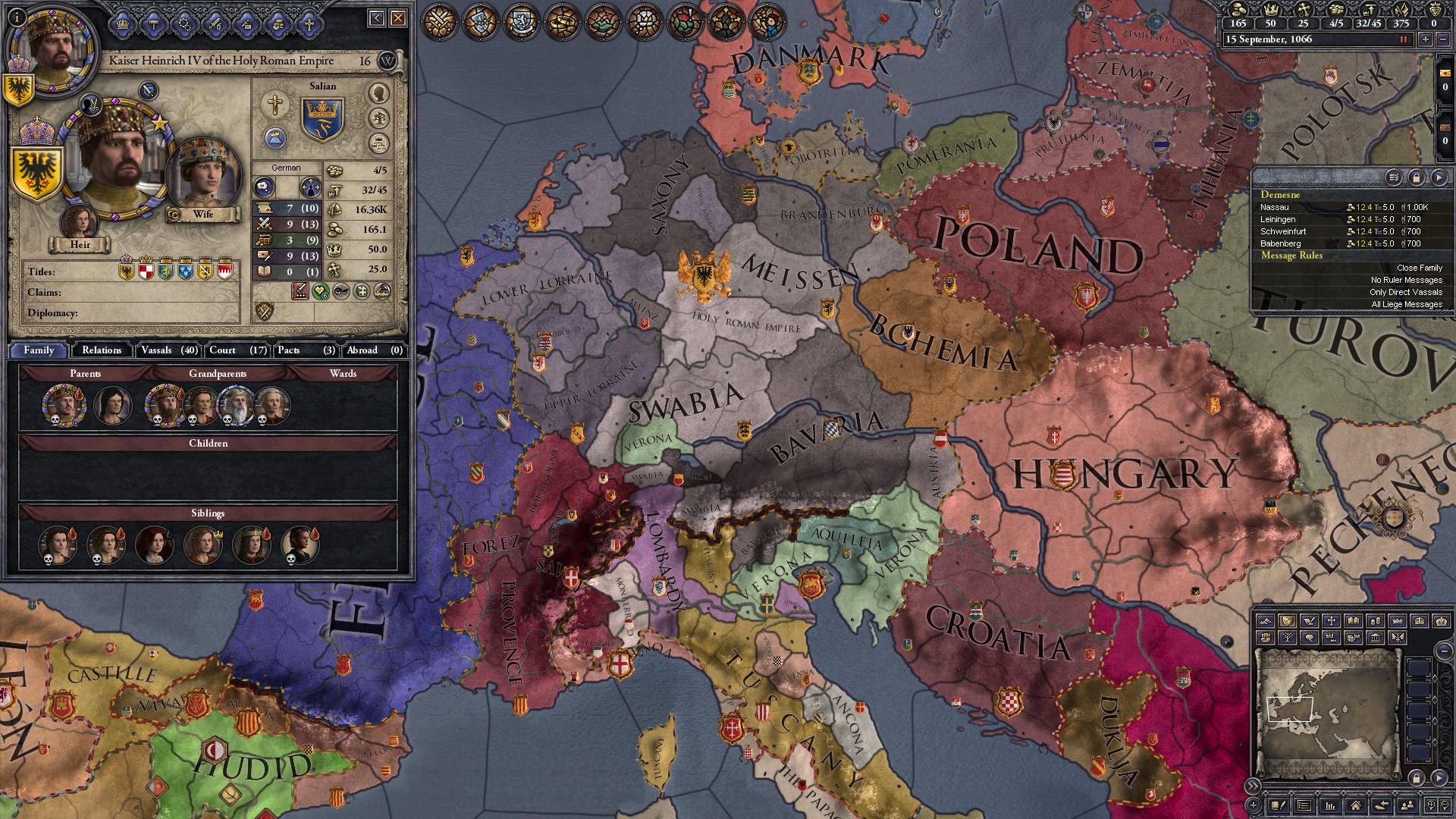 Do you try to imprison your insolent Duke or Baron who is leading a faction effort against your rule or do you wait for them to try it to be more justified? If you do imprison them, how long? How? Perhaps you’ll throw them in the dark hole that is the Oubliette? Or maybe just put them under house arrest? Of course, that’s if you don’t want to just be a cruel tyrant and execute them.

These choices alone are just scratching the surface of the long, treacherous, political game that this franchise successfully presents to the player. There is no easy win, and fans of other games like Imperator: Rome or the Europa Universalis series will love this game. After so long, countless outcomes are possible no matter how many times you play the same scenario over and over again, and that speaks to not only its replayability but its complexity and depth.

You can literally start out as a lowly King of a small Kingdom with a few counties and, through politics, arranged marriages, etc. you can marry your way into a much bigger Kingdom or Empire such as England or the ever-imposing, famous Holy Roman Empire. In the playthrough that I used to test the game, I fought very hard to gain any traction at all and struggled to keep the territories that I gained. I ended up losing quite a few of them, falling back to my starting point over many decades in-game, but slowly and patiently crawled my way back to a decent standing after I found a new angle and inspiration. 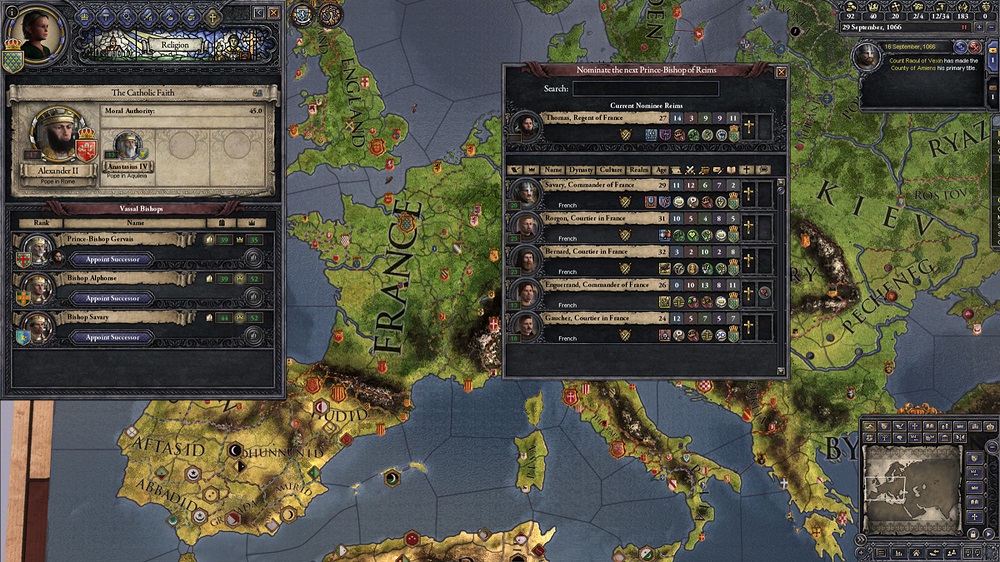 It can’t be said enough how good this game is for history buffs and those who would like an excuse to play games to learn. Almost every character has a button that links to their Wikipedia article, if one exists, allowing you to learn a lot more about the people you’re playing or playing against, allowing you far more immersion, understanding, and giving you a much deeper frame of reference.

If you thought $300 in DLC was a lot, though, you should see how many mods there are for this game that make it that much better, that much bigger, and more complex. I imagine that even when I get lost in the third game, I’ll end up coming back to this one just to see how much I can change it because of this aspect alone. Pick it up now for free on Steam, for sure, because if you enjoy grand strategy games, you definitely need to start playing your own medieval soap opera right now.

Don’t have $50 to spend or don’t want to put that much money down on a game you’re not sure you’ll enjoy, or not sure your computer can run? Do yourself the favor and get on Microsoft’s Xbox Game Pass. You have to download a launcher but it’s pretty light, and you can get your subscription started, if you’re a new user, for only $1 for the first month! If you don’t want to pay the $5 a month after that, be sure to cancel the subscription, but it’s well worth it to pay a dollar to try a game and then play it for a month before you buy it, if you choose to. 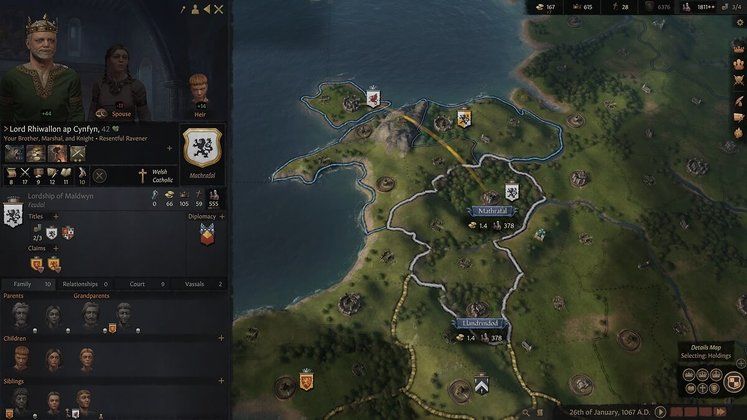 Nothing worse, after all, than playing a game for a month and then burning out on it, only to never want to play it again. Not that I would know anything about that.

The reviews so far have been stellar, with endless videos about the game pouring in from all kinds of gamers. One person I follow on Twitter is ecstatic about the chance to write stories based on his gameplay, truly a fascinating way to enjoy a game and share your experience. Needless to say, it seems at first glance like Paradox has really distilled the franchise into its purest, finest form in this installment, and I’m stoked to see not only the DLC but the updates to come. 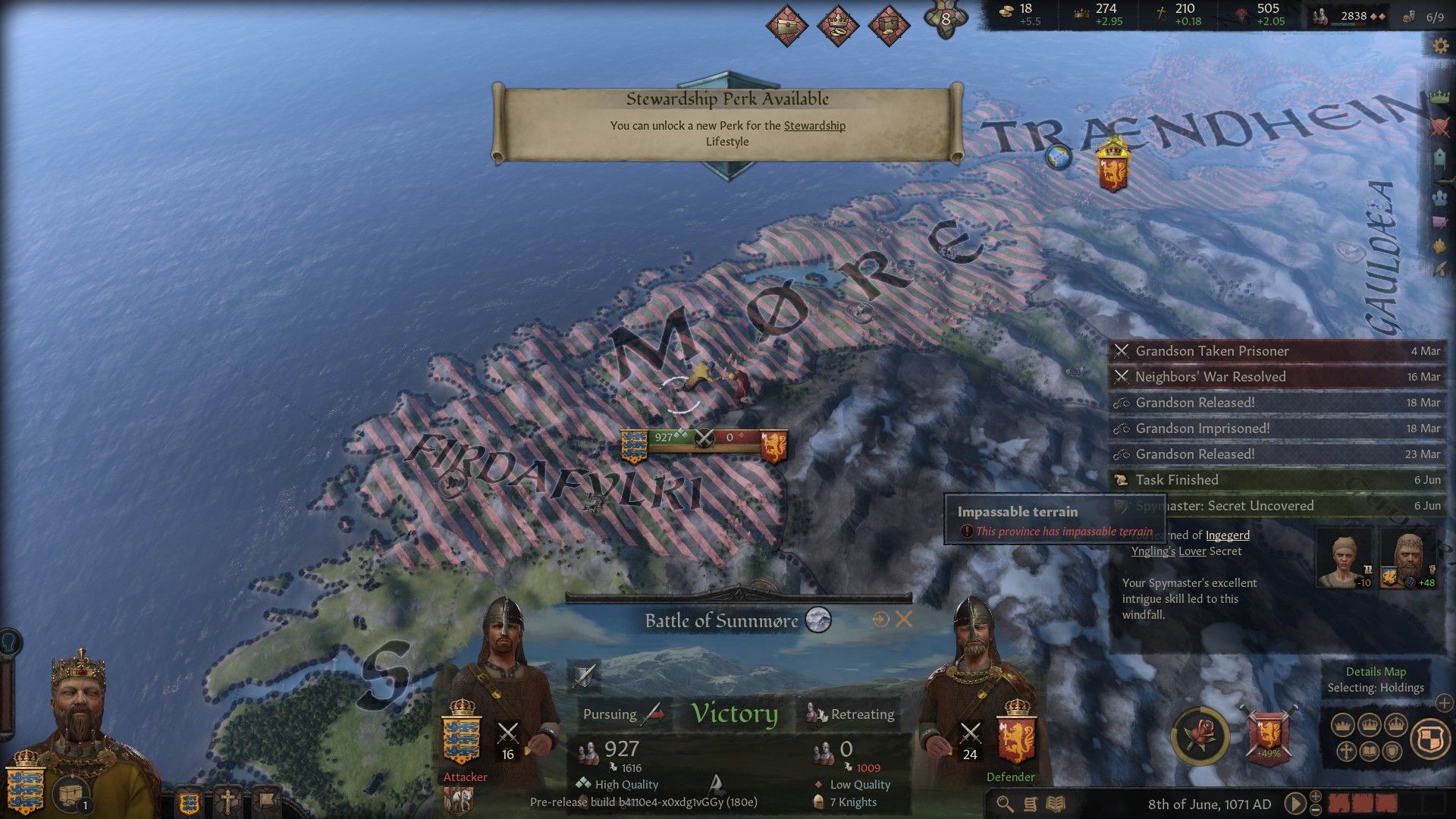 Based on first impressions, I can easily say the graphics are incredible in this installment. I look forward to my full review of the game, including the new features like the Lifestyle choices you can make for your character.

Now that we’re on the same page, I’m off to dive right in so I can get back to you next week! Let me know what your experiences with the game have been like in the comments down below!