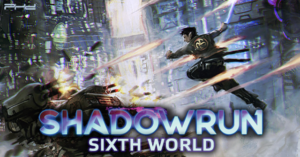 Shadowrun holds a special place in my heart. It was the first game to draw me into the cyberpunk genre and out of the realms of pure Tolkien fantasy. In this dystopian future, the nations of Earth have changed drastically with the reawakening of magic and the advent of technology advancing metahuman kind beyond our wildest dreams. Elves, dwarves, orks, and trolls all co-mingle with their human counterparts, simply trying to make a life for themselves under the shadow of a global corporatocracy.

The setting is what made me fall in love with SR. While the history of SR’s Earth is complicated, it boils down to a few things: magic has return to the world giving some the ability to cast spells or summon spirits, corporations now control every aspect of life, and cyber implants are widely available. But in its grungy complexity is its beauty. The detail and evolution of this world is breathtaking. I recommend reading how the world came to be here.

In SR, players take on the variety of ‘Shadowrunner’ archetypes. Shadowrunners live ‘off-the-grid’, or SINless, and make money through their questionably legal skillsets. Wetwork, espionage, hacking, and theft are common jobs for Shadowrunners. The first time I read the character creation process, though, I had to read it several times to understand how it worked. It provides decent customization and using a ‘Priority Table’ to allocate resources. The lack of a class system is great, but if a character doesn’t specialize in a skillset, they’ll have a major disadvantage. It also has too many resources to track all at once.

Here’s the real rub. The rules and mechanics of SR are so intricate, that it is easily overwhelming to new players. In combat, there are modifiers for range, lighting, cover, firearm recoil, and so much more. Further, players may find 3 rulesets happening at the same time: the physical, the astral (magic), and the matrix (hacking) worlds. If all 3 are happening at once, gameplay drags to a near halt as the GM has to dance between character’s perspectives. While the 6th edition has attempted to fix some of this mental ‘bottlenecking’ by streamlining hacking and astral combat, the mechanics will still have the players staring at their piles of D6s (six-sided dice) wondering what they’re supposed to be rolling.

Throughout what extra reading I’ve done, there has been little mention of trans characters in the world of Shadowrun. This tells me that the representation isn’t quite visible. However, the core rulebook never brings up the question of a character’s gender, giving a player freedom to express themselves. Further, in a 5th edition supplement, Chrome Flesh, the developers introduced ‘biosculpting’ which allowed characters to change their gender as they saw fit…for a price. If nothing else, giving the players options is better than locking them into a simple binary.