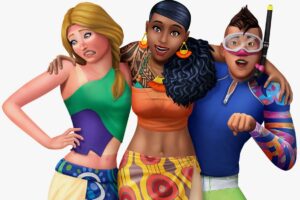 If you’re a Queer person reading this, chances are you have been “in the closet” by some measure, though that reductive narrative is limiting. A majority of us express how our time before we discover our true selves is spent feeling trapped playing a role we want desperately to escape. It becomes a prison sentence of isolation as we dissociate from some performative mask that we feel obligated to wear,, often overcompensating, for the identities we keep hidden.

I believe we tend to truly “come out” when we find a place we feel welcome and see people we resonate with. It’s easiest to find your role on the stage of the world when you know yourself. For me, and for many others in the LGBTQ+ community, writing stories and role-playing allows for self-discovery and experimentation without real-world consequences.

While there is a plethora of pop culture themes and tropes that Queer people can relate with, there has not been much in the way of explicit representation until more recently. As always, it is up to us to create our own stories and share them independently, often out of frustration, and so the Queer Tabletop market (including many pay-what-you-want titles) is arguably denser with enrichment that satisfies us more than the greater sprawling mass that Dungeons & Dragons has become. And it seems to do it almost by passion alone for less money to the consumer.

Succeeding Where the Mainstream Fails

In the mainstream market, the white cishet male is the primary target for all things branded with the fantasy and sci-fi genres. As stated, things have changed over the last several years as more queer folks find positions as influencers, game designers, and writers, but the issue is that the main source most people go to for Tabletop Role-playing is ultimately restrictive with its framework focused on mechanics and stats rather than storytelling.

There is a quote from Vince Gabrielle’s article over at Queereka (even all the way back in 2014!) that touches on D&D 5e’s attempt at inclusion and where it seemed, unfortunately, lacking in true understanding meaningful representation.

For a trans person the inclusion of the “trapped in a woman’s body” says that the authors did not do the research or talk to a trans person because they relied on a reductive, “coming out narrative” stereotype. For the intersex the use of the word “hermaphrodite” is a definite issue because that has been seen as stigmatizing and misleading. Hermaphrodite only refers to the presence of both genitalia and not the gender presentation or ambiguous genitalia of intersex people.

In the layer just below the surface of the big tabletops, there exists a network of queer artists and indie companies that make and distribute TTRPGs using different systems focused on the experience of communal storytelling in various genres, environments, and themes. In my foray through the #queertabletop hashtag that @SorcererOfTea wrote about here, it became immediately clear to me that I had been missing out on games designed by people like me for people like me.

The beauty of the tapestry of the LGBTQ+ community is woven by the stories we live everyday, highlighted by the exaggerated expressions of ourselves that we struggle to reveal to the general public. Adding to this experience of storytelling in a way geared to our identities as outsiders, role-playing allows us to truly immerse ourselves in our characters with a mask that is our own design. That’s how my story of self-discovery truly started: role-playing on a small forum on Zetaboards with other nerdy teens, creating a username and a character and a persona that would have me seen as a girl.

Somehow, I knew then in the back of my mind that that first foray into role-playing was the most important, having felt gender euphoria for the first time. In contrast, I began to understand dysphoria slowly as the years went on. I tried many characters, but I always kept coming back to this one particular character that continued evolving as I experimented with new ideas that had my heart racing, collaborating in a story as a character that felt more sincere to my nature.

I still find remnants of that first character in my personality today. What’s particularly funny to me is that another trans girl from that very forum came out a few years before I did on Facebook. We connected over that, realizing that our experiences in role-playing girl characters on forums had been a key facet of exploring and later discovering our identities.

In that way, it is heartwarming to see that the variety of tabletop games available provide countless different spaces for exploration and experimentation through different mechanics, however simple or creatively complex they might be.

One game I saw, Monolock, even uses a Jenga block tower as part of the game play! With seemingly boundless creativity, the queer tabletop community continues to astonish me with new concepts of what it means to tell our stories in ways that matter to us, helping us to really bring alive characters that we use to define aspects of ourselves through immersion into different worlds and scenarios.

Looking back, all of this just isn’t possible with just the mainstream systems, by my measure.

One of the pieces of text I found most moving in my research is a quote (seen below) from the About Me section of Avery Alder’s (@lackingceremony) website, Buried Without Ceremony. If you’re a queer person stumbling upon her name for the first time, do yourself a favor and read more about her and her theories and beliefs regarding game design, as I consider her truly an underrated and undervalued blessing to our community.

I believe a few things pretty seriously:
We are strongly moved and informed by stories.
Stories can bring communities together.
Stories reveal who we are.

The beautiful thing is that we don’t owe stories anything. We are free to create them, explore them, deconstruct them and learn from them as we see fit. We are free to draw from them only what we want and need, and to leave them afterward. There is a certain joy to this freedom, which I summarize as a freedom to “bury without ceremony.”

You may notice that not much is said about mechanics here, but reading that really struck a chord in me as a queer trans woman. I was finally seeing someone making real sense and saying things I knew that I couldn’t help but agree with. Those beliefs she lays out so plainly seem so casual and factual, but to me, they were a revelation about the purpose of role-playing and collaborative storytelling. In playing our roles, not only are we constantly learning more about ourselves through immersion, but we’re having fun with other people.

Playing out emotional scenes, achieving victory in difficult situations that make your heart really soar with pride, exploring romance and love – all of this happens in a far more natural and comfortable way when you focus on the storytelling as opposed to the mechanics.

In another vein regarding mechanics and depth, Orion Black (@DungeonCommandr) who now works by contract with WotC, talks about their game Mutants in the Night and its core focus in response to a question on how it differs from other entries that integrate violence in a way that leaves interpretation to each and every group:

This is somewhat of a complicated question due to the perception of violence in marginalized communities.

You can play Mutants in the Night without hurting people. Is that the core focus? No. The core focus is experiencing the intersections of marginalized existence and making choices with the tools available to you. Mechanically, it doesnt judge violence. Killing, yes, but only as a small source of heat.

Violence is an open and fair method of participating in the world of Mutants in the Night that leaves the act open for interpretation and examination.

Just this glimpse into the mind of Orion here leaves me thinking about how much deeper these concepts are than the comparatively generic concepts and themes found in mainstream tabletops. Niche markets are unique with their cult followings, and I feel like the ultimate freedom of having a smaller audience that appreciates your creativity as opposed to the limitations of trying to appeal to the masses is what really separates indie content of any variety from mainstream content.

This is the first article I’ll be writing regarding Queer Tabletops, and I hope to touch on the various other aspects in future posts. If you have any comments, feedback, or other things to add, please let me know in the comments below or at @Bailey_QG!

One Reply to “Queer Tabletops: Self-Discovery through Role-Play”