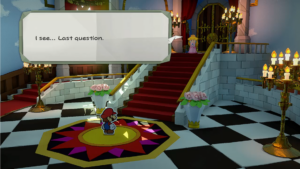 A really dark opening to a fun game.

Without giving too much spoilers, the story of the game is standard for a Mario game. The game opens with Mario and Luigi getting invited to the Origami festival. Where they discover Princess Peach; folded, brainwashed, and kidnapped once again. Along the way, Mario teams up with Olivia and together they must stop her brother, the Origami King. Throughout the game, the player visits many locations of the Mushroom Kingdom while taking on origami versions of familiar enemies. A very solid story that holds up very well.

Unlike previous Mario RPGs, Origami King does not feature a level up system. It instead relies on the use of coins and different equipment to increase damage done to enemies. While this is a disappointment to many RPG fans. This does make it easier for newer fans of the genre to sink their feet into game. 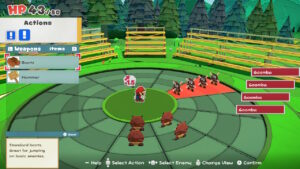 Battles take place on a wheel and turns are split into three parts. During the first phase of combat, Mario has the option to rotate and move enemies on the wheel. Lining up four enemies or in a two by two square increases Mario’s attack power. During the attacking phase, Mario must time his attacks to deal more damage to enemies. Much like previous Paper Mario games, timing a button press when Mario is jumping on the enemies will increase its power. This can be helpful when dealing with many enemies and stacks with lining the enemies up. The final phase is defense. Any enemies that are left will attack Mario and pressing a button at the right time will reduce damage. This combat system works out well with the only issue is how repetitive it is. 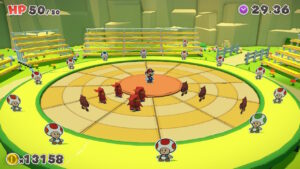 Returning from The Thousand Year Door; members of the audience can play a part in battle. Saving toads in the over world will have them join the audience. From there, Mario can throw coins into the crowd and have them interact with the battle. This can range from rotating/moving enemies to damaging them. The more coins the player drops, the more toads join in causing more effects to happen in battle.

Over World and Exploration 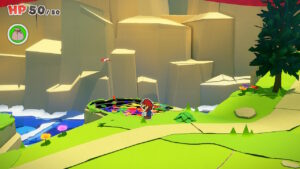 While the over world looks standard for a Paper Mario game, there are many interesting things about the environment. There are many points throughout the games story line where the player will see holes in the ground or walls. Throwing confetti can fill these holes. Filling these holes can lead to finding different secrets, reaching areas you normally are not able to, or revealing items. This is a good way to incentivize  the player to explorer each area of the map. Especially with how easy it is to obtain more confetti. As beating enemies or hitting trees can give confetti, there will never be a shortage. 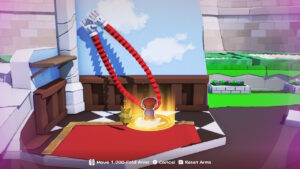 There are certain story elements hidden behind objects. Using the 1,000-fold arms ability, Mario can peel back certain layers of walls, knock down objects, or reach far off items. While this ability can lead to more areas to explorer, there is not too many uses for it outside of story progression. Throwing confetti or doing tasks is usually what leads to hidden secrets.

Whether being a veteran or a newcomer, Paper Mario: The Origami King creates a wonderful story with great game play. While there are many elements of the game that are a bit repetitive, this is a good direction Nintendo is going with the series. Getting closer to what made Paper Mario such a great game in the first place.