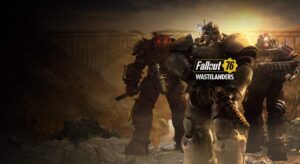 Here we go, the much hated, most controversial game of 2018 was Fallout 76. Hyped to be so much more than initial release, this game landed with a plethora of poor reviews, toxic community and was hated by most of the fans.

“A pointless walk in the post-apocalypse” – The Guardian

Now, those are some harsh reviews!  It was questioned whether it would just be written off by Bethesda as a failed experiment.

However! There was the “Wastelanders” update on 14th April 2020. This saw a vast overhaul of the entire game. Adding NPC’s, quest lines, intrigue, and purpose. It gave context to why you were there, focus on what you wanted to do. You have to be alert that your decisions can impact the game, and its factions. Reviews pivoted:

With such a drastic turn around, the time had co

me for me to pick it up, having initially stayed away from the game what with the bad reviews, it was now my opportunity to see how it had been turned around. I already was not a big fan of the fallout franchise, but I can safely say I’m now fully converted. Here is why. 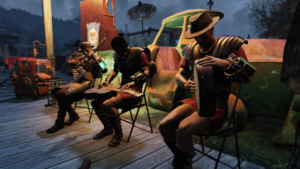 You start the story as someone leaving Vault 76 last (ironic feeling when you’re a late-comer to the game). You quickly find a couple of places for shelter, weapons and to begin to get your head around its crafting mechanics. Skyrim fans will love the depth of materials in use, the vast amounts of hoarding you can do! The initial few missions are all about getting you used to the game play and mechanics but carefully weave in the over-arching story between the rival factions: Settlers vs Raiders

Your actions will determine the victor of such a conflict. There are so many side quest lengthy story lines however, its easy to forget which faction you prefer to be part of. I recently am working my way through a quest line that helps me become apart of a secret assassin group (who have severely misinterpreted a superhero/assassin story and taken it as historical facts!). The entire build of the story was led by intrigue and mystery and only from digging around enough was I able to gain the knowledge I needed to progress in the story.

The game’s initial release didn’t really have that story, with so few NPC’s to interact with, this hostile PVP environment made it an impossible experience to enjoy. The Wastelanders update is described by the developers as practically a new game with hopes to add more and more expansions moving forward.

Receiving vast positive reviews it seems this game has evolved into something that now shines as a perfect example of a Fallout game rather than the initial disgrace.

I am not keen on the fact that these fixes came so late down the line. It might of served Bethesda better to think of this first before throwing it out for release. Elder Scrolls Online has such a vast player base simply because of its many many stories. I’m not certain how not including NPC’s and quests was a conscious decision, whilst its appearing to work in the games favour now, I can certainly appreciate why long time players might be disgruntled.

This game is 100% online. It is not MMO-like though. I doubt there are more than 20 players per lobby/server. But its actually really nice to team up with players and friends and go tackle some of the worlds biggest challenges together. With there being so many quirks and hidden gems in the world, me and my friends have become Appalachia’s greatest detectives!

We’ve been tracking down the Mothman’s cult including a sighting of the Mothman himself. We’ve found various tiny factions like the earlier mentioned assassin order. Its nice to see that so much is provided for us to delve into.

Alone or as a group this game provides plenty to do. It does recommend working as a team if you can, but there are some perk abilities you can use if you choose to work alone.

This is a Bethesda game, expect it to be as in depth as any game like Skyrim. The skill tree is known as  “SPECIAL” (Strength, Perception, Endurance, Charisma, Intelligence, Agility, Luck) and D&D players will certainly feel an almost character sheet vibe about those tree names. Each tree you can purchase points in and assign cards to each tree to make a combination that suits you. Pro tip; invest in Strength early game to allow you to carry more!

Then there is the crafting mechanics. This is pretty well refined though sometimes tricky. When you set up a camp however, you can custom build your own home, with furnishings, work tops, and using a power generator you can light the place up with lamps, and light up sign adverts. Even at a basic level of building, you can’t help but feel a sense of accomplishment when you finish your home sweet home! I personally also have a number of display cases, which I can use to show off rare-ish collectible pieces I find around the world during my excessive hoarding.

The game now is mainly Player – vs – Environment and not so Player – vs – Player as it was upon launch. Shooting at a player only triggers PvP when the 2nd person fires back. Otherwise, it is a peaceful PvE game with a focus on players helping one another rather than being toxic.

The game’s evolution has truly changed this experience around in a vast way.

I love the Elder Scrolls games and came to Fallout with some apprehension. I came to Fallout 76 with a very skeptical eye. Aware of its wrongs, and its problems I still pledged a near full game price for it hoping that I was going to enjoy it as much as it was being thoroughly recommended to me by my friends.

I believe I have a game now that I am going to pour hundreds of hours into, a vast open world I can enjoy as much as I did Skyrim. I can safely say I thoroughly enjoy Fallout 76. The exploration, the fact you can be loud or stealthy, the customisation, the freedom. These are things I look for in games and Fallout 76 (Wastelanders) delivers.

When writing this from what is now a positive point of view, I am very mindful that the game was hated by many for a long time before this update. So, I approach my ratings with that level of critique.

For around £20 ($25) it is at a good price for the level on content and time you will be putting into it. The Atomic shop is an in game store selling cosmetics and repair kits for gear. This means there is no pay-to-win abilities which is always a nice thing to see. You can also earn Atomic Shop currency completing challenges. Resulting in some of your purchases not even needing your to spend money for these cosmetics.

It can take time to get your head around the vast amount of mechanics, and to unlock the plans you need but in turn it works in favour of pouring more time into the game.

Now they have one! I would rate higher based on its current state, but I am accounting for its past lack of content.

Not as impressive as the masterpieces that exist in modern releases, but still very pretty and stunning in places. A lower rating as its very clear they are using the same engine as Skyrim and Fallout 4. You would expect some improvements over the years that have passed between games.

Gameplay is relatively smooth, a few quirks perhaps but nothing game breaking. The initial release was poorly reviewed with many glitches, but the Devs have done a lot to fix these.

Other than a couple of odd issues, the online aspects have worked perfectly. Teaming up and playing together to tackle the world’s problems is a key purpose of this game.

This game has come a long way since its much hated, historically terrible release. Fallout 76 is now enjoyable, engrossing, and worth putting time into. The game is no longer a ‘pointless walk’ in the apocalypse world. It keeps you on your toes, throws adventure and mystery into the mix. My own opinion of the game is now a positive one fully, and I daresay the more I play, the stronger I will begin to recommend this game.