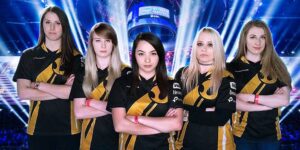 Ranked matches in video-games are typically the most competitive casual players will play but how does ranked placements match up to esports.

The Relationship between a games ranked system and a it’s esports is closely knit, for example Tom Clancy’s Rainbow 6 Siege is a fps game that uses ESL for it’s esports the strategies and rules used in the ESL games typically come from experiences in high ranks for example there is a certain amount of rounds before teams switch from attacking to defense. Other games such as Mortal Kombat uses the same rule set in their ranked as in their esports.

In a majority of cases high performing esports players such as Beaulo and Canadian have high ranks in the game they play,as they use it as practice for their aim and communication. But from personal experience with both ranked and esports stats, such as rank, does not mean a players skill in all cases. A common problem in analyzing players is that the existing stats will cover things such as k/d and stuff that the game records e.g accuracy but there are things that can’t be recorded in stat form such as a player’s mentality.

In it’s simplest form doing bad in a ranked game negatively effects a players mentality and vice versa. From this you could estimate a player’s mentality based of win/loss ratios, but it’s not that simple as players can still hold resilience of a positive mentality but play recklessly like a negative mentality. Ranked’s affect on the mentality of players depends on not only how they do but how they perceive how they are doing. A player could be doing statistically bad but perceive there losses as a form of improvement and use their previous failures to better themselves next time in that situation e.g blocking instead of attacking.

Ranked from a esports standpoint.

While ranked matches are more common then esports matches it’s undeniable that statistical points of players are looked at more then a players effectiveness in a whole. This is why when esports teams are looking for players they focus on their rank first, a higher ranked player is more likely to be picked up by a lower ranked player.

Ranked works as a sort of training grounds for upcoming players and those being recruited.  An upcoming could realize, “Hey, i’m pretty good at this game” and start taking an interest in the competitive side of the game. While players being recruited can be tested against players of a similar skill level of those in which they would being playing against in actual matches. In some cases even seasoned professional players will use ranked to practice or enhance their skills to adapt to new metas and tactics.

In short a games esports scene and ranked scene both benefit from each other. Whether it be introducing new players to the scenes or allowing new strategies and tactics to made for certain characters and maps.

A British MTF contributor with experiences in Semi-Professional Gaming Scene.
View all posts by RavenLuxur →