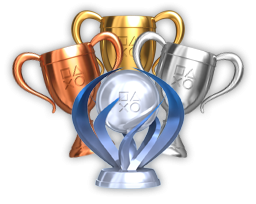 There’s nothing like the feeling of seeing the achievements of an amazing game pop-up on screen. Whether it be through having the Gamerscore add up in your Xbox account or seeing all the platinum trophies on someone’s PSN account, there’s always a sense of pride that follows showing people your account. Having only started platinum hunting at the end of 2018 as a personal challenge; I had never really thought about completing any games to completion before that. Who knew that challenge would lead to one of my biggest hobbies? As I mainly play most of my games on PlayStation, I will be talking in terms of PSN, but this can be carried over to other platforms as well.

When starting up a new game platinum two things generally come to mind before I start it up; is this something I can realistically do? What do I need to prep for this game? Am I ready to dodge 200 lightning bolts? Beating the same enemies repeatedly just a for a single item? Collecting one of every single item? Doing insane tricks in platformers or growing two extra arms to do combos in fighting games. All of these questions are pretty big on how I decide whether I want to platinum a game or not

Missable trophies and bugged trophies. These trophies are some of the more annoying ones when working through a game. If it’s a first playthrough; you probably wouldn’t want to spoil any parts of the game but there’s also the possibility of missing the trophy on accident and if that happens it would mean another playthrough. With games that take about take more than 40 hours to complete, this seems like an overwhelming task. But without proper planning, I probably would have driven myself insane doing multiple runs of Persona 4 Golden. There are spoiler free guides out there to look over as well as some of the trophy descriptions can give away a few hints of what to do without giving away too much of the game’s story

Playing games for hours on end can be very tiring but that’s not the hardest part about doing this. Certain events and trophies often become difficult to focus the more AAA game I play. There are two things I do to reduce this feeling. Try to tackle two or three different platinums at a time. While it would probably make a lot of platinums longer than they should be; playing different games with different genres is a bit refreshing and helps with burnout from a specific genre. Gathering every single Persona in Persona 5  would have driven me up a wall if I wasn’t doing Assassin’s Creed Odyssey at the same time. The other thing is that there are cheap five-dollar games that are designed to be platinumed within like an hour or less. Seeing a platinum come up, regardless of how easy is fairly refreshing and helps motivate towards the next platinum that may be bigger.

Honestly. For people interested in picking up achievement hunting, give it a shot. It could be fun thing to pick up and could potentially give a newfound respect for a game that you may have played to death in the past but still didn’t really dig through everything in.