I’m not someone who has been following Magic since it’s earliest inception. I’ve never even been a person to study every point in its history. Lately, however, the community has been split every which way:

The protests and riots happening in the US have divided the Magic community even after it was already split by the release of Ikoria’s Companion mechanic, which sparked controversy and started conversations about new practices regarding set releases. Many questioned whether enough playtesting was being done, or if research across all available formats was able to justify the “obviously” over-powered mechanic.

The heart of the issue with the mechanic in question lies with one of the key facets in the game: Card advantage. Basically, this means you have more cards available to use than your opponent. Therefore, if you have a Companion – a card that is able to be cast from outside your hand once per game with minimal caveats – you automatically have card advantage over players that do not implement them into their decks.

Over the decades, many cards and combos have seemed to overtake formats and tournaments. There are still players who tell horror stories about how broken “Caw Go” decks were, seeing Jace as a boogeyman. The people behind Magic, Wizards of the Coast (now another piece of Hasbro), also known as WotC, have faced tons of backlash for the recent release of companions, and for the first time in my own memory, they’ve completely changed the mechanic.

Once per game, any time you could cast a sorcery (during your main phase when the stack is empty), you can pay 3 generic mana to put your companion from your sideboard into your hand. This is a special action, not an activated ability.

Obviously, they can’t rewrite the paper cards to reflect this, but Judges are expected to uphold the change at official events while players at home can abide by the change or choose to play by the original text. Such decisions by players have previously lead to other formats like Commander, previously (and still sometimes) known as EDH (Eldrazi Demon Hunters/Highlander).

A statement from the article linked above reads:

While Magic rules changes aren’t normally a part of the banned and restricted list updates, in this case, we’re introducing a change to the companion mechanic that is motivated by game balance and metagame share across play environments. Effective with this update, the companion mechanic (and all cards featuring it) will now work differently from before.

Our reason for making this change is based on metagame data and play rates of companion decks across all formats, and on player feedback on repetitive gameplay patterns. As a group, decks using companions have too high of win rates and metagame share in Standard, Pioneer, and Modern, and have already necessitated bans in Legacy and Vintage. This trend represents a long-term problem for the health and diversity of all formats. Rather than go down the path of making several individual adjustments to the banned list for each format, we feel the better solution is to reduce the advantage gained from using a companion across the board.

As expected, this is a very even response and it sounds very professional. It lays out the why and how, it explains that they could have attempted a different path first, etc. Instead, they chose to listen to their player base and look at the evidence available.

Now, on the other hand, there has been an even greater division of a different nature. This one, unfortunately, is a fiscal division born of the company’s existence within a capitalist system. In a statement released on Mark Rosewater’s (Magic’s Head Designer) Tumblr, Blogatog, you can see a clear bias in regards to their focus on money over the average player. The statement in question is related to the pricing of the Double Masters set planned for release in August. If you want to avoid Tumblr, here is Mark’s reply, 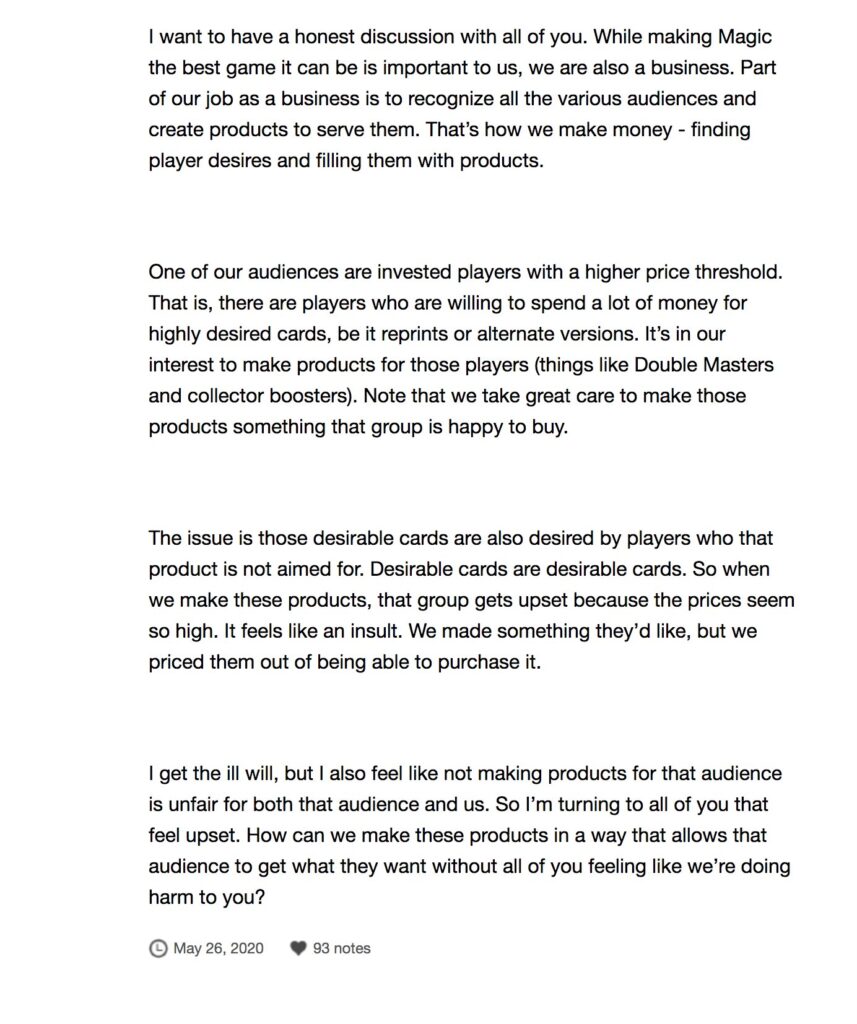 I understand the need of a company to cater to every possible piece of its audience, especially those that have more money or have an especially intense focus on the collectible part of CCG (collectible card game). However, $300 for a box of boosters of this set is a shocking three times as much as the normal sets. This has been a theme with previous non-block sets like Modern Masters but never to this extent.

Further, there was talk of a VIP booster priced at $90!

As players we know that they have all of this planned at least one or two years in advance, so it is no surprise that they seem tone-deaf to the current status of people’s wallets with all that is going on. Still, that hasn’t stopped them from continuing with the release of their Summer Secret Lair series.

Secret Lair drops are limited-time offers of particularly valuable cards, whether they are valuable for the especially good or cute art or because they are much-needed reprints of cards that are otherwise priced out of range for the average consumer. The latest reveals have faced significant backlash for being “money-grubbing”, keeping reprints of “Fetchlands” exclusive only to those that buy all 5 of the Secret Lair drops. That price adds up and, as many have noted, the themes across the sets don’t mesh. This means that if you want the new Fetchlands you have to either buy them in single from someone who got them the hard way or you cough up the money for all the drops yourself (even if you don’t want all of them).

Before, Fetchlands weren’t sought as being the be-all, end-all of mana-fixing, and have been seen as “trying too hard” for those that don’t have Landfall synergies in their decks. However, with the release of Ikoria’s triome cards that have 3 separate land types shown, this means that the Fetchlands now have many more valid targets for those that use Landfall and those that don’t.

If all of this wasn’t enough to be divisive for the player base, a controversy was sparked again last week when a player well-known in the community was harshly banned from tournaments for life following a Twitter thread where he blew the whistle about unfair tactics between WotC and the MPL (Magic Pro League).

Basically, they gave information related to upcoming changes to their pro players in an attempt to give them an edge in upcoming tournaments, ultimately making them look better. Instead, the curtain was pulled back and players were outraged to find that because someone brought this unfairness to the attention of the people he has been punished in an equally unfair manner simply because he wouldn’t tell WotC who leaked the information to him.

This thread has a link to the clip of Austin being banned live on Twitch with some commenters agreeing that Wizards has taken things a few steps too far. Overall, things aren’t looking good from the perspective of the average player when you look at all of the above. Many people blame Hasbro, and that could be the root of much of this, but ultimately this is a game that millions of people play not just for fun but because they love it and the community.

I’m going to cut it short here for now because there are bigger things going on in the US unrelated to card games and I think that deserves more attention. These squabbles can resume anytime but now is not that time.