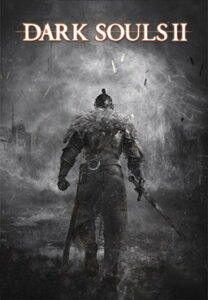 I have 500 hours, 7 complete runs, and 2 successful SL1 characters in Dark Souls 1. Since it’s release, the world of Lordran has taken up a massive portion of my life.

And yet, I’ve never played the sequel.

Cue the steam sales! I took the chance to buy the original Dark Souls for a heavily discounted price and upgrade from my measly pirated copy (I’m sorry, Miyazaki), and Dark Souls II: Scholar of the First Sin, the follow-up I never played.

I have no idea what to expect- I’ve avoided all details of this game like the plague. I’m probably going to die. A lot.

Two minutes in and I’ve already been sucked into a portal made out of angry ghosts in a tsunami. Great. Turns out the portal does not in fact lead to a watery grave, but to a grumpy old woman with too few teeth and too much exposition. Eventually, I get to start playing the game, and…

I look like Rick Astley fell into compost heap and died. I look terrible.

Ah well, you can’t have everything. Onwards!

There are pugs! Adorable, little zombie pugs that very much want me dead, and are impossible to hit. After dying more than a few times to a swarm of cute and cuddly obliteration, I make it across a bridge to a small, almost invisible hole in the shrubbery. After my close escape from the tiny little dogs, I’m horrified to find giant footprints in the ground.

If Dark Souls has taught me anything, it’s that large, obvious environmental clues are not a good thing. Knowing best for myself and definitely not being a wimp, I set off having not died horribly.

I come to a suspicious looking house in a tree that looks like it either contains a family of smurfs or a serial killer’s lair. Inside is neither Gargamel, nor Hannibal Lector, but the old plot women from earlier. The serial killer part is probably still true, though.

The women cackle somewhat creepily at me and make me look into their weird magic doll, and through the power of menus, I remember my human form.

No longer shall Dranglaic be plagued by nuclear stockpiles and the privatization of the health service! Standing for the common hollow, I will bring order and justice to the citizens of this once-great nation. The king shall fall, and I will take his throne, and usher in a new age of prosperity

Next time, I’ll die to an angry hippo, and Corbyn will learn what zombification feels like. Will I escape the pugs? Will they be kidnapped for use by future prime-ministers in university? What will become of the mysterious footprints? Find out next time in Dark Souls Diaries.