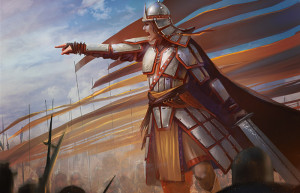 Alesha belong to the Mardu Horde, warriors get to choose their own name upon great feats in battle. At the age of sixteen she gets to have this honor and she uses this opportunity to announce to all that she is not a boy as the others see her, but as a female. She was nervous but her name was shouted by the other warriors without any hesitation.

Then the khan came to Alesha. She stood before him, snakes coiling in the pit of her stomach, and told how she had slain her first dragon. The khan nodded and asked her name.

“Alesha,” she said, as loudly as she could. Just Alesha, her grandmother’s name.

“Alesha!” the khan shouted, without a moment’s pause.

And the whole gathered horde shouted “Alesha!” in reply. The warriors of the Mardu shouted her name.

Years later she eventually becomes the khan of the Mardu. A nameless orc in her horde mocks her for being transgender. Before Alesha can confront him, a dragon appears. She slays itsingle handily earning the nameless orc’s respect and the title “Who Smiles at Death”

It is a very positive transgender female story. A story of a young transgender girl that earns respect of the other warriors and later grows to be their leader.