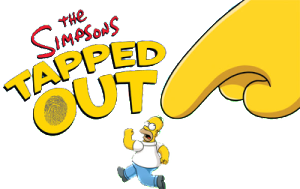 I downloaded The Simpsons: Tapped Out on my iPhone over a year ago and I’m still playing this game almost every day. I usually don’t play iPhone based city builder games more than a week or two. After a while it gets very repetitive and there is a long down time until you actually get to build anything. Although there can be a 24-hour wait for something complete in Tapped Out, this down time didn’t shy me away from the game. What kept me loving this game is the same thing that kept me loving the television series: the great comedy and story telling.

Electronic Arts updates the game almost every week with new missions and rewards. The mission is started with some dialog between characters. The writing will be very familiar to fans of the show. In fact, there is a lot of missions that tie into the upcoming new episode on Fox. It is like a sneak peak into what you can expect when you watch the show. One piece of humor that is used through out the missions is the breaking of the third wall. The Simpsons know that they are being controlled by a “great finger in the sky” and will talk directly to you.

The game begins with Homer playing The Happy Little Elf Game on his tablet. As he is doing this, he ignores the warnings lights going off while working as a safety inspector at the Springfield nuclear power plant. This causes Springfield to blow up and Homer must rebuild Springfield. As you start to build the various buildings that open up as you level more Springfielders start to show up. If you’ve played other city builder games on smart phones, you’ll have no problem picking up how to play this game.

If you are a fan of The Simpsons or city building games I would suggest downloading this and trying it out. It is free to play with premium buildings and characters you can purchase.