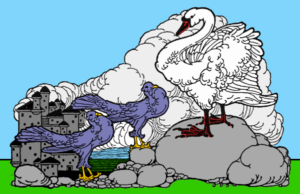 A swan telling a story. Much like the GM tells a story to the players in a game session, often of fantastical tales, such as a swan telling stories

I have one more post to write on Gen Con. But we’ve been hearing about Gen Con for months now. Let’s take a break before we finish it up. It’s been a long time since we’ve had any installments on the Analysis of GMing series. Let’s get another one of those in! This time, we’ll talk about planning a game session.

So you’ve chosen a game, gathered a group of players, and have a design for the overall campaign. It’s time to start getting into the nitty-gritty. Before you meet up with your players for that first session, you need to know what’s going to happen in that session. So let’s take a look at that.

What is a Game Session?

If we’re going to talk about game sessions, we need to make sure we know what we mean by that term. The game session is a single instance of the players getting together to play the game. It usually lasts for a few hours. Some groups like to go for just an hour at a time, and others like to play for six or more hours. But usually, a game session averages about three hours, give or take.

A collection of game sessions makes up a story. This is the self-contained unit in which an overall conflict is presented to the characters, and the characters overcome that conflict. Conflicts might be ‘the monsters in the forest are attacking the village, and someone needs to stop them or otherwise defend the village.’ Another conflict is ‘Your rival is trying to usurp your throne.’ A story is not the small obstacles that must be overcome in the course of the plot. Finding a way across the ravine is not a conflict; it’s just an obstacle.

Some stories only last for a single game session. This is often the case in episodic campaigns, but not always. In many campaigns, especially character- or event-driven ones, stories will usually last between two and ten sessions.

The collection of all stories told in the course of the game is the campaign. Depending on the nature of the campaign, the stories may be connected, or not. Some campaigns only consist of a single story; others may last for years, and involve hundreds of stories.

In essence, you’re detailing the specific story that you’re going to tell. For example, my current Friday night Changeling game just concluded a story in which they had been asked to investigate a series of disappearances. That story lasted only a single session. Before that, they were asked to find the lost son of an NPC. I expected that story to last for one session, but it ended up lasting two.

But in preparing the story, you are getting ready for however many game sessions the story ends up lasting. So we’re going to focus on preparing a story. The time it takes you to get through that story is secondary.

If you’re running a game for Butt Kickers or Power Gamers, it can be pretty easy. Since they’re not overly worried about personality or plot, you can just draw up a dungeon floor plan (using the term ‘dungeon’ to mean ‘any place the characters are exploring’) and list what they will find in each room.

For Tacticians, your approach will be similar. Just be sure to give that player plenty of opportunities for strategic decisions.

Similarly, Specialists don’t always need a lot of plot or characterisation. Instead of providing strategic decisions, make sure to include opportunities for their chosen archetype to shine. For example, if your group contains a ninja Specialist, that player will be happy if you run a game session with lots of chances to be sneakily deadly.

Storytellers and Method Actors are more tricky. They will feel cheated if you don’t tell a story with either plot (for Storytellers) or personality (Method Actors). If it’s Method Actors you’re working with, don’t forget to include a lot of interpersonal interaction, ethical dilemmas, and other opportunities for them to explore their characters’ psyches

For Storytellers, you need to remember to follow Freytag’s Pyramid. The important thing is: what is the conflict? If you have trouble coming up with ideas, don’t despair! There are many useful websites out there that can help you! Perhaps my favourite is Seventh Sanctum. Among the wonderful generators on that site are several writing aids. I really like the Envisioner, which takes existing stories and mashes them together. A few suggestions that it might give you include:

They have other generators to help you, if this one doesn’t work for you.

You also need to make sure you have NPCs ready. Don’t just create enemies; create allies (and potential allies) as well! If you need help creating NPCs, there are some good character generators out there as well. My favourite is the Character Personality Generator at Springhole.com. It randomly decides how strongly a character is in several personality traits, such as ‘courteous,’ ‘risk-taking,’ ‘honest,’ and ‘flirty.’

Don’t forget maps, if they’ll be needed. This might be the specific location in which a story takes place (the tavern where the fight will break out, the dungeon the players will explore, etc). It might be a general location important to the story (the space station where the players live, the city in which the session takes place, and so on). Or it might be the environment where the game is set (a map of the nation, or of the world, or a star chart of the sector where the space marines operate). You can find maps and generators online as well. This twitter feed creates a regional map every hour. This website allows you to generate a fantasy city map. Google image searches can turn up other maps that people have created and put online. And a regular google search will bring up many other generators and stockpiles if you need them.

So, you’ve got everything ready. Next time, we start the actual game itself! Until then, remember to