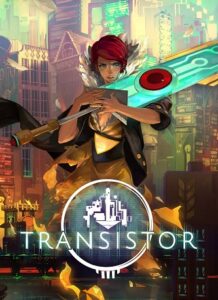 Oh I really enjoyed Transistor. I finished the regular and NG+ play-throughs of the game across a span of about 3-4 days. One could probably rush through the story in as little as 3 hours, or take time unlocking all the lore, doing the side challenges for extra xp and game knowledge, listening to the catchy music, and stopping to smell all the roses along the way and end up taking easily triple or quadruple that.

The game and combat mechanics are pretty fun, with a number of subroutines that you unlock or add to your Transistor weapon as you level up. You form actual skills with those subroutines, using a combination of active slots, support slots (that you slot subroutines into to improve active slots), and four passive slots (buffs to improve your character as a whole). Each subroutine does a different, but thematically similar, thing depending on whether it’s currently in an active, passive, or support slot.

There are thus many different possible and valid skill combinations and loadouts, and I found myself constantly swapping back and forth between them as I went through the game, especially once I started doing the side challenges where constraints force you to experiment and find new and efficient (or slow and steady) ways of killing things. In addition, each subroutine represents a character within the game’s lore and to unlock the full lore for a character, if so desired, requires you to use their subroutine in each of the three slot types for at least one battle, each slot type unlocking about 1/3 of their character bio.

Combat itself is a combination of real time and planning mode, and is split up largely into a number of self-contained encounters. Planning mode pauses the map and allows you to preview, queue, and execute in quick succession a number of attacks at once in an interface similar to Xcom or Shadowrun Returns, except that you can preview and rewind options before finally committing. There is no miss chance, or random skill damage, damage is constant but modified by variables depending on if the enemy is stunned or backstabbed, for example.

Carrying out actions in the planning mode enables them all to be done in less than a game time second, so it become a power play of sorts whenever planning mode is up, but each ability used in planning mode has a cost which is subtracted from the remaining amount of action points you have in that round of planning. Once you leave planning mode, however, you cannot use most skills until the cooldown for the next planning round is up, leaving you with a few seconds of vulnerability between planning rounds. However, skills used during real time do not trigger a cooldown, and so in some cases it is very beneficial to fight things in real time (or a combination of the two) instead of always in planning mode.

An interesting mechanic that I did not figure out until I was into NG+, was that while you have a certain number of action points to spend per round, not actually spending them all allows your downtime before you next skill use to be proportionally smaller, which is critical versus a certain enemy in the game. On the flip side, spending “over” what you normally have in planning mode locks your skills for that much longer before you can use them again!

The story in the game was pretty neat, if a little on the short side, with a narration style similar to Bastion, but this time the narrator is also the Transistor and with you from the start. Like Bastion, you are dumped right into the plot to start off, and the story is revealed in pieces as you go along. The narration is touching in places, boring in others, but overall quite well done. That ending though. It came unexpected to me the first time, as I didn’t think that was the end of the game yet, but hit harder the second time through for me when I knew what was coming. I didn’t want to end the game. I did love the ambience though! A combination of the music and the dystopian steampunk background scenery. I am a sucker for night-time big city skylines, and the art in this game evoked so many wistful memories.

A couple cons of the game: It’s very easy to miss certain lore terminals and the game often doesn’t let you back up if you went a little too far in one direction. It is often not obvious which way is “onward” and which way is a dead end with a lore piece. Your only options then are to load back from the last save (and you can only save at certain locations, though there is pretty much one before or after nearly every fight) or wait until NG+ to see what you missed. Or YouTube. The narrator is also overly talkative at times, though I guess that’s a personality trait. There are also several plot holes in the story to me still, like *why* the Transistor’s ownership got passed over to Red, and several other things I feel are little plot holes here and there that are not adequately explained.