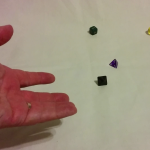 I have talked at some length about board games, and a little about one specific roleplaying game, but I haven’t yet talked in general about my favourite kind of games: roleplaying games. It’s not surprising that I enjoy RPGs; as I’ve mentioned here before, I am a storyteller player type, which means that I most enjoy games that follow Freytag’s pyramid, especially if they involve character growth and the development of interpersonal relationships. Given the right gaming group, roleplaying games are the best vehicle for telling stories as a game that you can hope to find. So I’m going to talk today about this wonderful type of game.

A brief history of roleplaying games

Back in the early 70s, tabletop war games were at the height of their popularity. Players would assemble to place miniatures or other tokens on large maps, and move them around to simulate tactical military situations. Sometimes, these would be scenarios based on actual battles; other times, they were situations developed whole cloth from the players’ imaginations. In either case, each player controlled several units, ranging from squadrons of infantry to panzer tank formations.

Then one day, a man named Gary Gygax created a new war game system set in a world reminiscent of Tolkien’s Middle Earth. This system included rules for combat using magic spells. Dave Arneson took this setting and merged it with his own ideas for having players control a single warrior instead of an entire battalion. This became the first roleplaying game: Dungeons and Dragons.

Other RPGs came along, many of them imitations of the original D&D, but some showing promise of innovations. Flash Gordon and the Warriors of Mongo was perhaps the first game built from an existing franchise, and Bunnies and Burrows was an early attempt to push the envelope of what was possible with roleplaying games.

The 80s saw a proliferation of games, not all of them good, but some which are still popular today. Steve Jackson published the first edition of GURPS, Champions was released, and the darkly humorous game Paranoia was also unleashed. These games challenged the old notion that roleplaying was all about killing monsters and taking their treasure; they started adding character details like personality traits, and reminding players that there were other possible goals besides the accumulation of power, wealth, and dead monsters.

In the 90s, another wave of innovations came along. Up until this time, gaming books were dry affairs, with simple columns of text punctuated by charts and simple black-and-white drawings. That all began to change with the release of Vampire: The Masquerade. This game included high-quality artwork, introduced borders and other ornamentation for the pages, and even strived to make the charts and tables more pleasant to look at. Subsequent editions and later releases from the same line (Werewolf, Mage, Wraith, and Changeling) increased the visual quality. This had a lasting effect on the industry. Although there had been some attempt at increased visual appeal before this time (the Advanced Dungeons and Dragons books had included full-colour illustrations), it was the success of Vampire that caused everyone in the industry to really begin to work on the aesthetic appeal of their products. The third edition of D&D and the 4th edition of GURPS were particularly noteworthy examples of the changes wrought by this paradigm shift.

Tabletop roleplaying games aren’t as popular as they used to be. There are many possible reasons for this. Maybe, with the advent of hyper-realistic graphics in computer games, it can often be easier to sit down with a controller in your hand than to try to get a group of gamers together to roll dice. Perhaps the increased popularity of mobile devices is decreasing our desire for in-person social contact. It’s conceivable that the tabletop RPG market has become so over-saturated, especially with the internet making homebrew rules systems easier to share and use, that people are jaded to new possibilities, and now stick to the tried-and-true games.

But that’s a quick look at the evolution of the games.

What is an RPG?

So what exactly do you do when you play a roleplaying game? Well, like the name suggests, you play a role. The vast majority of games involve a character sheet, which has numbers that represent attributes. These indicate how strong, agile, intelligent, charismatic, etc, your character is. Then there are skills, which list specific competencies that your character has learned. These can include abilities such as medical expertise, knowledge of computers, abilities to survive in hostile environments, and proficiency with weapons. Some games include certain advantages and disadvantages, like the ‘Social Stigma’ that I wrote about a few weeks back. This can also include physical limitations (like a missing arm), mental disabilities (such as phobias and delusions), social status (like having a good or bad reputation), and many other characteristics.

Then, once the character has been created, players describe the actions taken by their characters, and the GM (short for Game Master) tells them the outcome of those actions.

Where it goes from there is up to the group. Depending on the game and the interests of the players, characters can have adventures as simple as exploring a dungeon and fighting the monsters that live within it to claim the treasure in each room. Other games involve more epic quests, like fighting to save a kingdom from the forces of evil. Some games are more personal, like the ones in which characters struggle to overcome personal hardships.

But whatever the goal of a specific game, the object depends on the players as well. For some players, success comes in the form of the amount of treasure earned, or the number of enemies slain. For others, a game is ‘won’ if the specific goal of the game is achieved. Still others play to be part of a story, or to watch the characters develop and interact. Some players even enjoy developing a ‘GM vs Players’ rivalry, and consider themselves to have ‘won’ if they are able to thwart the GM’s plans.

Roleplaying games don’t provide a specific scenario for the players to experience. Many of them will offer supplements that are a specific story, which players may purchase and use if they so desire. But generally, the GM will design an adventure for his group.

Why you should play a roleplaying game

The first and most obvious reason a person should try a roleplaying game is because it’s fun. Many people enjoy the process of controlling a character as he or she travels through the adventure. There are many different reasons to enjoy the game, and all of them are valid.

But beyond the game itself, there’s the creativity involved. There is effectively no limit on the number of characters that can be created in any given game system. It is up to the players’ imaginations who they create. Depending on the system being used, players can experience any setting they wish, from Tolkien-esque fantasy to the wild west to dystopian futures to ancient history… and often, you can combine multiple settings (as Shadowrun did by dropping magic and fantasy races like elves and dwarves into a cyberpunk setting).

In addition, there’s the social contact that is so essential to human existence. Even if a game session is less enjoyable than normal, you’ll always have the satisfaction of having spent an evening with your friends, interacting via an activity that brings you all closer together.

I’ve done several board game reviews. Maybe in the future, I will do some roleplaying game reviews as well. What say you, good people? Would you be interested in seeing something like that? Leave your opinions in the comment section below, and I will see you here again next week. Until then,