Since the release of the Xbox 360 back in 2006, achievements have made their way into gaming as a kind of medal of honor. Completing the achievement list for a game not only shows people how much you love a game; but also, the dedication to explorer almost every single part the game has to offer. While many games require hundreds of hours and multiple playthroughs to complete, there are many great games with easy achievements. This list will follow games that are easy to complete but still leaves the player with a sense of accomplishment.

Steven Universe: Save the Light 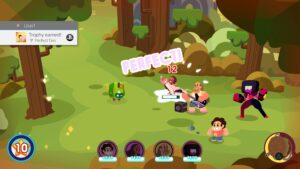 Steven Universe: Save the Light released in 2017 for the PS4 and Xbox One with Steam and Switch releases later. Not only was this game based off a Cartoon Network show, it was also a follow-up to a mobile game. While this may turn people away given that many games like these are often cash grabs. Save the Light proved to be an amazing that follows the lore of the show while maintaining nice RPG mechanics. Think of the combat as something like Paper Mario. Completing the game’s story will unlock a majority of the achievements. Really the hardest achievements would be to block ten attacks or completing the game 100 percent. This is a game I will recommend for beginning achievement hunters due to its quick storyline and ease of obtainment. 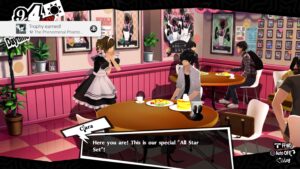 Last trophy I obtained. A visit to the maid cafe

Despite Persona 4 Golden and Persona 5 requiring at least two playthroughs, careful planning, and hundreds of hours. Persona 5 Royal requires almost none of that. Obtaining the platinum no longer requires multiple playthroughs. Outside of story progression, wandering through Tokyo will obtain a good portion of the trophies. This can include visiting certain areas and doing certain activities. Trophies that revolve around combat are almost unmissable. The only trophy relating to a specific battle, outside of story, is the reaper fight. Persona 5 Royal is a great game for anyone looking to hunt for an RPG or a Persona game. 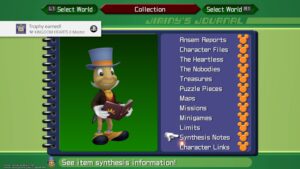 Kingdom Hearts is a massive franchise with six different games to hunt for. With a strange mixture of Disney and Final Fantasy, Kingdom Hearts created an amazing story with great gameplay to go with it. While every game would be great to add onto an achievement list, the best game to start with would be Kingdom Hearts II. Compared to the other games KHII only requires one playthrough yet still offers fun yet challenging gameplay. Most achievements in KHII revolve around completing Jiminy’s journal. This can include completing minigames with certain scores, finding and defeating every enemy in the game, and defeating every optional boss. While Kingdom Hearts III is arguably easier in achievements, it felt too easy at times. KHII creates a perfect balance between its rewards versus challenge. 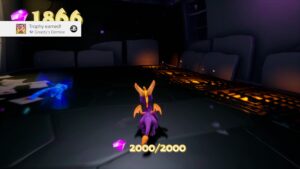 Completion of every part of this game

The Spyro Reignited Trilogy offers the first three Spyro games remastered to look amazing in today’s standards. While all three of these games are great to add to a list, the first game is a great starting game to add to any achievement list. Every achievement in game revolves around completing certain challenges in each level. This ranges from something easy like setting sheep on fire or something difficult like defeating multiple enemies in one glide. Classic games like Spyro are always so fun to come back to and the achievements list create an incentive to master it. Spyro the Dragon creates many fun platforming challenges that push the player to get creative to complete them. 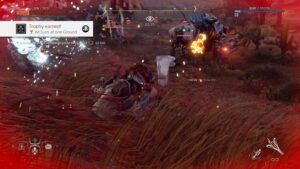 The Sun trials. Some of these are very challenging

Being an open world game, Horizon Zero Dawn creates a beautiful environment along with an amazing storyline. Not every mission is required in this massive game. There are many missions that can be skipped to obtain the platinum trophy. There are many trophies that revolve around certain challenges in game while others revolve around side missions from certain characters. Really, the hardest trophies in this game are collection trophies that require the player to search every corner of the map. Regardless, this game takes about 40 hours to platinum making it one of the shorter open world games to complete.

Achievement hunting is an interesting hobby to get into. Hundreds of hours of dedication to many different games can be daunting. While there are many challenges can intimidate many players, the feeling of overcoming those challenges are amazing. With more people getting into gaming, there will be more people getting into achievement hunting. Hopefully this list gives a good idea on where to start with an achievement list.

Maya first started gaming at the age of three with a copy of Pokemon Silver on the Gameboy color and just fell in love with the hobby. Expanding her horizons on different games and genres turned into something that eventually lead to her seeking out a career in gaming.
View all posts by Maya Moraleja →