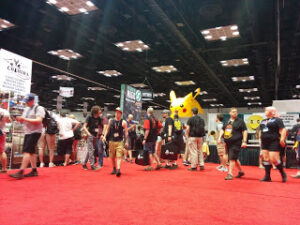 As most of you know, I was able to attend Gen Con last week. It was my first time ever to attend a convention (apart from the small local one that doesn’t really count). I had no idea what to expect from conventions in general, nor from Gen Con in particular. Needless to say, I had ridiculous amounts of fun. I got to play lots of games, see lots of panels, learn lots of things, and of course, buy lots of games. I have a lot of ideas for articles about my time at Gen Con, so look for those in upcoming weeks. Just a small sample of some of the entries I’ll be writing include:

And more! So this space is going to be pretty busy over the next couple of months. Be sure to check back weekly to see if I’ve managed to get something new up.
But in the meantime, I thought I’d start out with an overview of the convention itself. This is going to take the form of two sections: a description of the convention in general, and a guide to what to expect for people who’ve never been to a con.

An Overview of Gen Con

The first Gen Con was held in Lake Geneva, Wisconsin, in 1968, when Gary Gygax rented space in the Horticultural Hall for members of the International Federation of Wargaming who were not able to attend the IFW’s annual club conventions in Pennsylvania. As this event was being held in Lake Geneva, they jokingly called it the Geneva Convention, which was eventually shortened to its current official title of Gen Con. At first, the convention (which had about a hundred attendees in its first year) was dedicated to board games and miniatures war games. As it grew, however, it eventually came to include any analogue games. This includes tabletop roleplaying and live action roleplaying. Video games do have a small presence now, but the focus is still very much on analogue games.

It was located in various places in Wisconsin until settling in Milwaukee in 1985. Eventually, it grew so large that it had to be moved to Indianapolis in 2003, where it still currently takes place. The Indiana Convention Center houses the exhibit hall, some gaming halls, and many meeting rooms where most of the events occur. Many events are held in hotels which surround the ICC, because there are so many events the ICC can’t house them all.

The city seems to welcome the convention. In addition to hotels which house the participants, the street that runs along the east side of the center fills with food trucks for most of the day. There are banners on lightposts welcoming gamers to Indianapolis. I even saw billboards greeting us as we entered the city limits.

So what is there to do and see at Gen Con? Read on, my friends, read on… 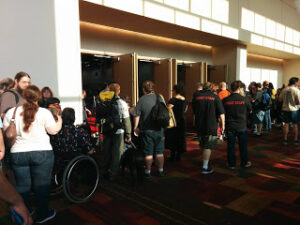 As mentioned, I had never been to a con. I had no idea what to expect. I ended up kind of just diving in with a sink-or-swim approach. In some ways, this worked out for me, but there were some things that I definitely learned for the next time I’m able to attend. So on the off-chance that you’ve never been to a con and don’t know anyone else who has, I will provide you with the wisdom from my experience. Of course, this information is specific to Gen Con, but it shouldn’t be too different for other gaming conventions. And keep in mind that other types of cons (like comic conventions) will probably be quite different.

There are three main things to do at Gen Con: go to the exhibit hall, attend events, and play games.

In some ways, the exhibit hall is the heart of the con. 335,000 square feet are filled with 572 booths of varying sizes. Most of these booths are game companies, from the enormous  (like Asmodee, which had five large booth spaces clustered together near the centre of the hall) to the tiny (like Escape Hatch Games, a brand new company that just launched in December and has only released one game so far, and had only a single 10×10 space). These booths sell their company’s specific games.

Some are stores that sell games from any company, rather than a company that produces specific games. Others sell accessories, like dice or box organisers or soundtrack CDs. Still others sell paraphernalia, like t-shirts, leather goods, or handbags shaped like dice. There were even a number of booths for artists (Ruth Thompson and NeNe Thomas being two prominent examples), authors (such as Keith Baker and Robin Hobb), and other entertainers (like Zombie Orpheus Entertainment, makers of fine films like The Gamers and Dark Dungeons).

I was there on a press pass, and so was allowed early access to the exhibit hall on Thursday. After talking to a couple of exhibitors that I knew I wanted to cover, I spent the next hour just wandering around the hall. I was overwhelmed with what there was to see. It took me that long just to get my bearings and get a sense of what was available. 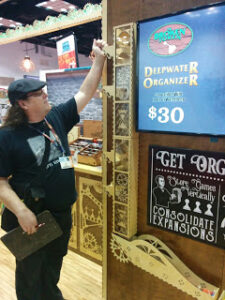 As I prepared to attend Gen Con, I spent a considerable amount of time looking at the available events. Many of them had sold out before I became aware of them, even though it was still a couple months ahead of the con. Not knowing what to expect, I signed up for as many as I could fit into my schedule. My friend Nick, on the other hand, became so overwhelmed in looking at the events list that he chose not to attend any at all.

The best plan, now that I’ve been to the con, is somewhere in between. Sign up for some events, but not so many that you don’t have time to spend in the exhibit hall.

Events run the gamut. Some were panels with speakers presenting on a variety of topics. Others were entertainment, like Marc Gunn singing an array of Firefly drinking songs, or the ‘Nerdlesque Burlesque’ show. Still others are organised game play events. These include companies teaching attendees to play their games, or introducing new releases. I attended sixteen of these events over the duration. That’s even less than I had planned to attend; two of the events I wanted to attend were cancelled! 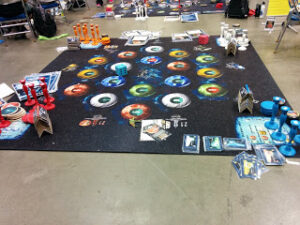 In a way, it almost seems counter-intuitive that a person would go to a gaming convention and play games. Wouldn’t you have your time full of wandering the exhibit hall and attending events?

That was what I was thinking when I was preparing for Gen Con. But then I arrived, and realised how dumb an idea that was. What better activity at a gaming convention than to play the actual games?

Alas, I was ignorant. I did not realise how many opportunities there would be to play games. I had expected to play games only at scheduled events. This is part of why I bought tickets to so many. I wanted to play Changeling, as well as Hanabi, Star Trek Catan, The Resistance: Avalon, and Dungeon! So I signed up for those events, as well as a couple ‘new release’ events.

Somehow, in researching Gen Con, I failed to notice that they had game rooms where people could just sit and play games for hours. They even have a games library, where attendees could check out games to play. The games hall, which was 223,000 square feet of tables and chairs, was constantly full of people playing games. Many of the tables were under the purview of companies or organisations that were running organised game events. But some of them were free (at least part of the time) for anyone who wanted to sit down and play games. I met up with some friends at a couple of points to play games that we had just purchased in the exhibit hall.

And the best part of it was that groups playing games would often set the box up at the end of the table so passers-by could see what they were playing. Usually, people would stop by and ask, ‘How is that game? I was thinking of buying it. Do you think I should?’ Sometimes, they’d ask more detailed questions. But sometimes, they’d ask if they could join! It seemed like people wanted strangers to join them! In fact, that was how I ended up meeting a really nice older gentleman who, after playing Nick’s copy of Bang! The Dice Game with us, brought out his copy of Tyrants of the Underdark.

And this wasn’t just happening in the gaming hall! Many times, I saw people sitting in the corridors playing card games like Exploding Kittens or Munchkin. At one point, I was killing time in the corridor waiting for my travelling companion’s last event to finish, when I saw a woman walking up and down the hall holding up a sign that said ‘Werewolf.’ Apparently, she and her companion wanted to play, and were advertising that they wanted more players to join them.

Gen Con was a ridiculous amount of fun. I saw so many wonderful things, and learned so much, and made professional contact with several people and organisations in my role as writer for PinkFae. I will write about these in the future, of course. But apart from my role as correspondent, I spent nearly seventy nine straight hours deliriously happy at all the things I was seeing and doing (with the notable exception of the loud argument and louder music in the hotel room next to ours at 2 in the morning on Saturday).

As I mentioned, I’ll be writing several articles over the next week about the con. So be sure to check back next week. Until then,