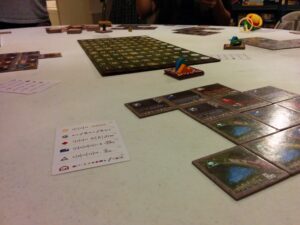 We have come to the time in which I review yet another board game. This time around, we will look at a very enjoyable game called Between Two Cities. This city-building game has elements of both co-operative and competitive games, using a hand turning mechanism like 7 Wonders or Sushi Go. But let’s not get ahead of ourselves… we’ll look at the numbers first, and go from there. 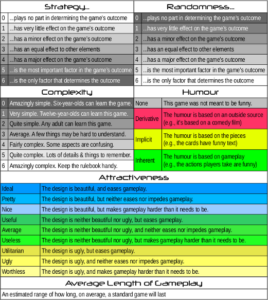 An overview of Between Two Cities

Players start with a hand of tiles representing houses, factories, offices, parks, taverns, and shops. They select two, pass the rest to the next player, and reveal them simultaneously. Then they put one in the city on their left, and one in the city on their right. They must collaborate with the player on either side for maximum points. After the first turn, two tiles will begin a city on your right, one from you and one from the player on your right. Likewise, two tiles start a city on your left, one that you played and the other contributed by the player to your left. In later turns, you’ll add to both of these.

Players mark their scores with meeples that represent architectural landmarks. Examples include the St Louis Arch, the pyramids of Giza, and the Sydney Harbour Bridge. After scoring both, the lower scoring city is the final score. The player with the highest score is the winner.

Permutations in Between Two Cities

This game is a lot of fun because it feels like a co-operative game until the very end. You can’t expect to get a decent score without working co-operatively with the players beside you. You have to discuss the tiles you have available and choose which one will be of the greatest benefit. But at the end, when calculating scores, it suddenly switches to a competitive game, with a single player declared the winner.

Also, because the scoring is a little complex, it’s hard to keep track of how many points a specific player has. This makes it harder to gauge who’s in the lead, so it’s easier to focus on making the best play you can each turn. This adds to the co-operative feel of the game.

There are two minor downsides to this game, in my opinion. The first is that the theme is a bit thin; you’re just building a city. Still, the game play more than makes up for it, so I don’t hold this against it.

The second is that, because scoring can be slightly complex, it can sometimes take a bit of time at the end to complete the scoring for each player. But that is also, in my opinion, a minor grievance.

Final Thoughts on Between Two Cities

I personally enjoyed this game quite a lot. I liked that you had to work closely with the other players in order to maximise your own score. I’ve also grown fond of the hand-passing mechanic, where you choose one or two cards (or tiles) to play, then pass your hand to the next player. Not knowing exactly what you’re going to have available next turn adds some exciting mystery!

The game is quick and fairly easy, so it’s good for light fare between meatier games, or with limited time, or even to play with kids. Younger players might have trouble understanding the scoring, but it may be worth taking the time to help them learn!

The company that publishes Between Two Cities, Stonemaier Games, has a print-and-play version on their website, so you can try it before you buy it. But I do recommend that you buy a copy; the architectural meeples alone are worth it!

Anyway, that’s my thoughts on Between Two Cities. I hope you enjoyed reading about it, and I hope you decide to give it a try yourself! In the meantime, have fun playing games, and I will see you here next week. Until then,