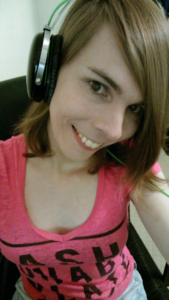 I was given the opportunity to interview Twitch streamer and YouTuber DistractedElf. She is best known for streaming X-COM on Twitch. She started off on YouTube where she posts role-playing campaigns she GMs.

Katie Walter: How did you come up with the name DistractedElf as your Twitch username?

DistractedElf: Well, initially when I started my channel I wanted some kind of gimmick. So it was a costume thing! I do a lot of LARP so I had the elf ears. Not to mention it was a username that I hadn’t heard before, so I hoped it’d be unique.

KW: Do you ever share any of your LARP games on Twitch?

DE: Hard to do, because of hardware limitations. I talk about the stuff that happens all the time, but being able to actually stream it would require a lot of setup that is just, sort of impossible

KW: What made you want to start streaming your games on Twitch?

DE: I started out on YouTube, but I felt like I didn’t have as much connection to my audience there. So instead I switched over to Twitch and the feeling of community kept me coming back. I mean, not to mention it’s playing videogames for a job! No reason not to want that!

KW: What are some of the games that you like to stream?

DE: I’ve streamed a lot of things in the past. I’m a variety caster, so I sort of move around from game to game a fair bit. What I’d say though is that XCOM is definitely one of my favourites and I play that a lot. Really excited for XCOM 2.

DE: I was already a full-time streamer when I came out as transgender. Honestly my experience has been really positive. Sure there are the occasional idiots who come in and troll or anything like that. But honestly the key to that is just to have supportive people around, good moderators, and a thick skin, and nothing anyone can say on the internet is going to hurt you. At least that’s how I feel.

I have a policy of “you get once chance to realize what you said was rude” so to speak. Someone comes into the channel and says something I don’t like. If I tell them so, then they continue to be rude then generally a moderator will time-out or ban them.

The core of my community is really solid, and I love them every day for their support and awesomeness.

KW: Could you share with us a story of a positive experience you had streaming?

DE: Well there are tons of little examples day to day. Lots of people who say nice things, and support the stream. But I think as for a story’s purpose I think the best was when I came out.

So up until just before this story I’d be streaming as a guy. Lots of people knew something was up and there’d been a lot of build-up in terms of that people seemed to have figured out something was up with me.

I was super, super nervous up the public “Hey guys, I’m trans” speech. Really worried I’d lose everyone who’d ever watched and that my stream would basically be over.

When I did tell everyone the response was actually WAY different. Most people were super supportive and had lots of awesome encouragement to give. My community has always been such a source of positivity for me.

KW: You’re currently at almost 6500 subscribers. What do you do that is different than other streamers out there? What sets you apart? How long have you been doing this?

DE: Something to quickly clarify is that is about the number of followers that I have. Subscribers are the folks who pay the 4.99 a month and have the little icon next to their name in chat.

As to what I do differently. I like to think I provide a safe space for any LGBTQ community folks who want a place they can hang out with like minded folks. We’re all sort of a big group of friends rather than “broadcaster and viewers” which I try and cultivate as much as I can.

I’ve been a full time streamer for 3 years, and I’ve loved pretty much every moment. Definitely a lot of perseverance required sometimes, but anything worth doing takes time to do if you ask me.

KW: What advice would you give to someone that wants to start streaming their gaming experiences?

DE: If we’re talking about general streaming tips, my advice is to make sure that your audio/video quality is good! Don’t start streaming with the idea that you’re going to make a whole lot of money, do it for the fun!

If you find you don’t have a lot of viewers to start, that’s totally normal, just keep doing what you’re doing and you’ll end up with a little community sooner or later!

KW: Where can people follow you? When can people find you streaming? Do you have a set schedule?

DE: My stream is www.twitch.tv/distractedelf, and I’m live every day except for Sundays for 10:30 AM MST until whenever feel like a good time to stop.

KW: Thank you very much for the interview. Do you have any last words of wisdom to share with us?

DE: Thanks for having me! I think the last thing I’d add is don’t like nervousness or anything like that stop you from doing something you think’ll be fun! Just go for it, I promise it’s likely to be more positive an experience than you worry it’ll be.