Have you ever wanted to throw an asteroid at the moon? Or replace the sun with a neutron star? Or even terraform Mars? The sequel to Universe Sandbox, a much more fleshed out version of the original game, is currently in Early Access on Steam, but already has many more features than the original. Arguably the most notable of these is that collisions now actually look like… well, collisions. Rather than the larger object just absorbing the smaller object, now the kinetic energy of an object is transferred into heat and light energy, with debris being spat out of the crater, just to impact an hour or so later. It truly is a magnificent display, watching an asteroid strike a planet in real time. Even better – the asteroids leave permanent craters on the surface they impacted. 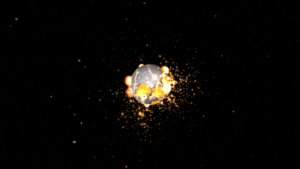 You alright there, moon?

Universe Sandbox ² reminds me of a similar game – Space Engine, the passive, more ambient cousin to Universe Sandbox’s brutal destruction and in-depth simulation. Where Space Engine specializes in providing a vast, procedurally generated universe, which is fully explorable down to the hill-climbing level, Universe Sandbox focuses more on the individual simulation of entities in space. You can’t control anything but yourself in Space Engine, which makes it less of a game, and more of an immersive experience.

The first thing I did after getting in-game, is what most people would do when having such a toolbox presented to them. I crashed the moon into earth. And let me tell you, I was surprised. 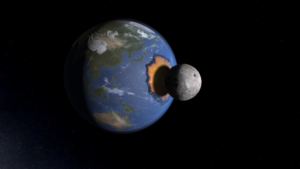 The instant the moon touched the earth, a wave of molten rock spread over the earth, the water quickly evaporating as the entire planet heated up, and eventually became a sphere of lava. I went into the planet info, and artificially changed the temperature back down to around 15°C. Instead of just returning to planet earth as we know it, it had shifted into a completely new arrangement of continents, looking nothing at all like it did before. And because of the way Universe Sandbox ²’s new climate system works, despite being completely recreated, earth would still undergo seasons due to its tilt. 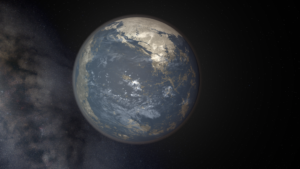 As of now, only two planets have climate simulation – Earth and Mars. Which means that one can terraform Mars, making its atmosphere breathable, with an atmospheric pressure that can support life, and warm it up so that it has permanent oceans. Unfortunately, you can’t populate it with life, which is a shame. I, for one, would love to see Mars covered in plant life. However, the game is in Early Access for a reason, features like this may come to be added as time goes on. 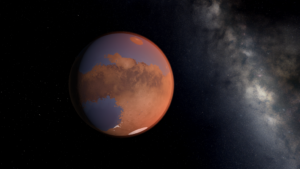 Universe Sandbox ² allows you to place any entity in space, with orbits, meaning you can create your own star systems and such. Rather than being limited to real life planets, stars and moons, you also have access to procedurally generated ones, meaning that one person’s created solar system will be entirely different to another person’s. You could have a gas giant orbiting a neutron star, which is orbited by a rocky planet, which is in turn orbited by a captured asteroid.

Universe Sandbox ² has a lot of potential as a space simulator, and its Early Access status hopefully means that new features will continue to be added for a while yet. For a game which is not yet completed, it’s already full of things to do, and has some pretty impressive technology behind its simulations.