My first to Gen Con in Indianapolis was a blast. I drove down there Thursday morning. I had some problems trying to figure out where I could park. I wasn’t able to make it to the Writing Comics: Writing Women Friendly Comics seminar since I got there later then I intended. I picked up some generic tickets and wondered around trying to find a program.

It was very overwhelming the first day. There were so many people and so many games that I didn’t know where to go first. I eventually headed off to the Upper Deck tables to try out the new Legendary Secret Wars. I was the second person in line for generic tickets. They were registering the people that had dedicated tickets for the event first. I was waiting for a little over an hour to get in, but got turned away due to all the tables being full.

I went back to the Upper Deck tables early on a Friday. After they changed their rules on how players can get participate in the events, I managed to get to play Secret Wars with four other players. We didn’t beat the game but we did have a lot of fun. I picked up a copy of the game later that day.

I went to the Women at the Table seminar that same day. It was interesting to listen to, but they mainly were talking about RPGs rather than board games. There were a few store owners asking questions about how to  get women to not just shop there but to stay there and play some games.

Immediately after that seminar I went to the Gaymer seminar. I actually was surprised how much they were talking about transgender gamers at the seminar. I thought they would be talking about gay gamers more than anything. The presenter was talking about a passage in the Dungeons & Dragons Player’s Handbook 5th Edition that was revolutionary in gaming:

You don’t need to be confined to binary notions of sex and gender. The elf god Corellon Larthian is often seen as androgynous or hermaphrodite, for example, and some elves in the multiverse are made in Corellon’s image. You could also play a female character who presents herself as a man, a man who feels trapped in a female body, or a beared female dwarf who hates being mistaken for a male. Likewise, your character’s sexual orientation is for you to decide.

The presenter informed us that the above passage was written by a man who has a transgender daughter and had to fight to keep it in the Player’s Handbook. I first played D&D when it was released in the red box many years ago. I can remember trying to follow the rules as closely as I could. You can imagine should young child in their tweens reading that and implanting the thought that it is okay to be outside of the norm. 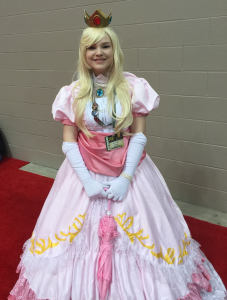 The rest of the afternoon on Friday I spent browsing the various vendors. It was very crowded and it was difficult to get to see everything. I could have just spent an entire day just doing that and still have not seen all of the vendors. I did get to play Shadowrun: Crossfire before calling it a day.

The morning of Saturday I played some more games including Sentinels of the Multiverse and One Deck Dungeon. One Deck Dungeon was very simple to learn and fun to play. The game was still in beta. I wanted to pick up a copy but there wasn’t any available. It should be out in stores by the Fall of 2015.

I went to the Women in Games After Gamergate seminar early Saturday afternoon. I managed to get a question to the panel during the seminar. I asked if they believed that transgender women are part of the discourse about Gamergate. They didn’t really answer the question directly, but they made it very clear that transgender women are women. One of them told a story about a transgender gamer at the convention who was kicked out of three different bathrooms at Gen Con and she had to go back to her hotel room. I personally didn’t experience that at all myself. Whenever I use a public bathroom I usually keep my head down, don’t look directly at anyone and don’t speak to anyone. I always feel that the two things that give me away is my face and my voice.

Overall, Gen Con was a fabulous experience. I can’t wait to go back next year. Next year I should be better prepared to get into the events that I would like to be a part of.