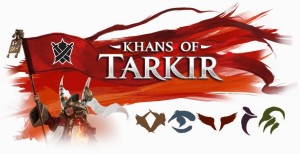 I’ve been collecting the Magic: The Gathering Fates Reforged set. I had a complete set along with a boat load of common cards. I thought I would try to put together a Khans of Takir block constructed deck. I put my deck to the test at ,my first ever Friday Night Magic gathering at The Gaming Goat, which was running a standard deck tournament.

The deck I made was centered around the Mardu Horde. You can see my deck at tappedout.net. I played three best of three matches. I didn’t manage to win a single game. Yet, I think it was more my game play than my deck. I knew the basic rules, but was no means an expert. In fact, my opponents were teaching me how to play as I went along. That’s really want Friday Night Magic is all about, learning how to play the game and making some friends along the way.

Overall it was a very good experience. I’ve been going to the Gaming Goat regularly since I discovered it. The staff there is very friendly and the players there were friendly as well. I was the only female player, let alone the only transgender player. Of course, that didn’t put a damper on the fun at all.

I am trying to collect some of the two other sets in the Khans of Takir block to improve the deck that I made. Any suggestions I could get would be greatly appreciated. I’m also trying to make a Tiny Leaders deck with Alesha as the commander