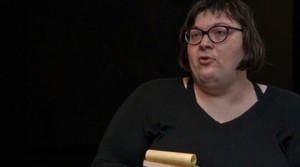 Anna Anthropy is a freeware game designer of such titles as Mighty Jill Off, Redder, Lesbian Spider Queens of Mars and Dys4ia. On March 20, 2012 she published the critically acclaimed book Rise of the Videogame Zinesters. The book calls on game industry to develop games outside of the current corporate model and design and show a greater diversity of the human experience.

I haven’t heard of Anna or the book until I found the video of her interview with Frank Lantz the director of the New York University Game Center. I’m not a game designer myself, so I never follow that side of the industry. As a player I like to play games that I enjoy, regardless if it was published by a large corporate publisher or an independent developer. There are a lot of games out there and it is difficult to find games that I might enjoy. I usually get interested in titles by reading Game Informer (which is heavily biased towards corporate published games) or by word of mouth.

The interview she had with Frank Lantz is very interesting and eye opening for someone that has little idea about the design side of the gaming industry. I know that I am going to pick up her book and try out some of her games. I also noticed that she is utilizing crowdfunding and has her own Patreon listing.